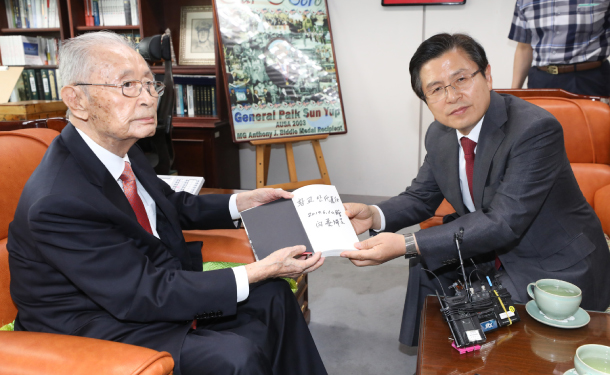 Hwang Kyo-ahn, chairman of the Liberty Korea Party, right, pays a visit to Korean War hero Paik Sun-yup on Monday at the War Memorial of Korea in Yongsan District in central Seoul and receives a signed book. [NEWS1]

The chairman of the Liberty Korea Party (LKP) visited Paik, one of the most celebrated commanders of the 1950-53 Korean War, Monday afternoon. A larger-than-life figure, Paik, 98, was the first four-star general in the history of the Korean military.

He is best known for leading the 1st Infantry Division into Pyongyang on Oct. 19, 1950, the first division to enter the city. He was also one of the first officers to face Chinese troops in the war.

Hwang was referring to Moon’s Memorial Day speech, in which the president praised a late North Korean statesman for his role in Korea’s independence from Japan’s colonial rule. Moon noted that the Korean Volunteer Army, led by Kim, was later incorporated into the Liberation Army. He said, “The unified Liberation Army members’ indomitable determination to resist, as well as the military capabilities fostered in cooperation with the Allied Forces, served as the root of the founding of the Republic of Korea’s Armed Forces following liberation and later became the groundwork for the ROK-U.S. alliance.”

Paik told Hwang that he had learned about the controversy from the news. “I don’t know the details,” he said, “but I saw in the media that the president has said so.”

The conservatives, particularly the LKP, were furious about Moon’s speech, as they see Kim as a communist and someone to be blamed for the 1950-53 Korean War.

Kim, who served as deputy commander of the Liberation Army of the provisional government in China, came to the South after liberation, but crossed the border into the North in 1947. A founding member of the North Korean regime, Kim served as head of the State Inspection Commission, a position equivalent to the prosecutor general of South Korea. He also served as labor minister and a member of the Supreme People’s Assembly. After the Korean War, he was purged by Kim Il Sung in 1958.

Hwang’s decision to meet Paik was a direct challenge to Moon’s remarks that Kim’s troops were part of the foundation of the Korean armed forces, as the 98-year-old general was one of the founding members of the National Defense Guard of Korea, the ancestor of the Republic of Korea’s Armed Forces. Paik served as one of the commanding officers of the National Defense Guard, established on Jan. 15, 1946, by the United States Army Military Government in Korea.

In a publication released in 1988 under the Kim Dae-jung administration to mark the 50-year history of the military, the Ministry of National Defense said the National Defense Guard is the ancestor of the Korean Armed Forces.

“I believe it was wrong for Moon to mention Kim in front of the families of the patriots and soldiers whose lives were sacrificed during the Korean War,” Hwang said, referring to the speech being delivered on Memorial Day. “And we will do our best to lay bare the truth about Kim.”

At the meeting, Hwang also received the blessing of the retired general. “Please lead our people well, and I hope your leadership will build a country with strong national security,” Paik told Hwang.

Meanwhile, the Blue House tried to stop the ideological battle from widening. A senior presidential aide on Monday denied speculation that the government has a plan to give the late North Korean statesman an award for independence activism.

After watching the movie “Assassination” in 2015, which portrayed independence activists including Kim, Moon, who was head of the liberal Democratic Party at the time, wrote on Facebook that the South should ease its standards and honor more independence activists, as the two Koreas’ ideological race has come to an end.

“The Ministry of Patriots and Veterans Affairs has standards to confer a decoration,” said the senior presidential aide on Monday. “Anyone who contributed to or actively supported the foundation of the North Korean regime and anyone who participated in an anti-state activity after the foundation of the Korean government are excluded from receiving honors, according to Clause 8 of the standards. Kim, therefore, is not eligible to receive the decoration.”

He also said the Moon administration has no plan to change the rules. “We have no intention to immediately change the standards. There is no need to talk about this anymore.”

The presidential aide also said the government has no plan to fund a ceremony to mark the centennial anniversary of the foundation of Kim’s Korean Volunteer Army.

A public opinion poll showed Monday that the nation was split about the possibility of awarding a national merit to Kim as an independent activist. According to a survey conducted by Realmeter, a polling company, 42.6 percent of the public said he deserves the honor for his contribution to independence, while 39.9 percent said they disagree because of his contribution to the North Korean regime.

The difference was within the margin of error. Another 17.5 percent had no opinion or did not answer.

Liberals in their 20s, 30s and 40s who support the Democratic Party and Justice Party mainly said Kim deserves the honor, while conservatives in their 60s or older who support the LKP and the Bareunmirae Party mostly said they disagree. The opinions were split among people in their 50s and those that don’t support a party.