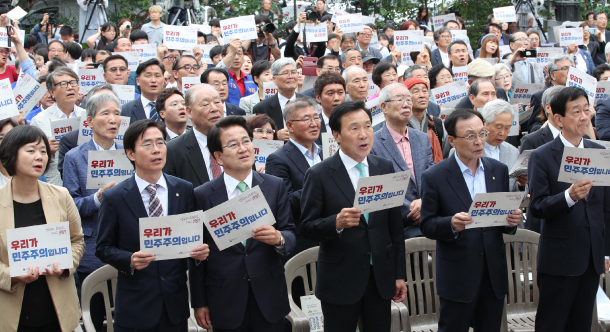 Lawmakers, including the leaders of the ruling Democratic Party and minor opposition Bareunmirae Party, Party for Democracy and Peace, and Justice Party, attend a ceremony marking the 32nd anniversary of the June 10 Democracy Movement in Yongsan District, central Seoul, on Monday. The nationwide demonstration from June 10 to June 29, 1987, resisted President Chun Doo Hwan’s decision to designate Roh Tae-woo his successor and demanded the direct election of the president. [KIM KYUNG-R0K]

President Moon Jae-in on Monday called for efforts to resolve inequality and create a fair society to further develop democracy.

Moon urged the public to try to practice democracy more frequently and become democrats, while also emphasizing democracy in the economy.

The president made the remarks in a congratulatory address given at a ceremony marking the 32nd anniversary of the June 10 Democracy Movement.

In 1987, a nationwide movement against the military-backed government of Chun Doo Hwan took place from June 10 to 29, triggered by its ruthless crackdown for years on the people’s yearning for democracy and escalating public anger over the torture death of student protester Park Jong-chul.

The movement eventually led to the June 29 Declaration, which included an amendment to the Constitution to have a direct presidential election.

“Democracy is our way of life before it is a system. We should try to more frequently practice democracy and become democrats,” Moon said in the address read by Minister of the Interior and Safety Chin Young. Moon is now on a trip to Northern Europe.

“In order for democracy to grow bigger, we should resolve inequality and create a fair society. We should also practice democracy in the economy,” Moon said.

Monday’s ceremony was held at a former building of the police’s anti-communism investigation division in Namyeong-dong, central Seoul, which will be turned into the Democracy and Human Rights Memorial Hall by 2022. The Namyeong-dong building was used by police in the ’70s and ’80s to torture anti-government and pro-democracy activists, including the late Park.

Moon also stressed the spirit of dialogue and compromise to resolve social conflict.

“As democracy spreads, we face more conflict. Thus we need a spirit of compromise and citizens’ democratic abilities to resolve social conflict,” the president said.