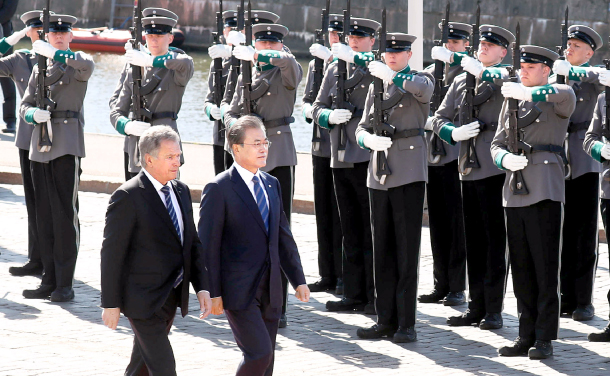 The leaders of Korea and Finland agreed Monday to boost bilateral exchanges in various areas including technology start-ups, trade in defense and energy and exchanges of people by opening a new direct air route.

President Moon Jae-in had a summit with Finnish counterpart Sauli Niinisto on Monday and held a joint press conference to announce their agreement to cooperate in various sectors.

“We agreed to strengthen our cooperation in industries for future growth, start-ups and innovation,” Moon said in opening remarks at the media conference, adding that he and Niinisto will attend the Korea-Finland Startup Summit to support businessmen in the two countries.

Moon said the two countries created a systemic foundation to expand exchanges in innovative technologies by signing relevant memorandums of understanding. “We will build an ecosystem where the small and medium companies and start-ups as well as conglomerates of the two countries will mutually prosper,” he said.

Moon also explained his North Korea policy to Niinisto and obtained support from Finland, which will assume the six-month rotating presidency of the European Union in July, the Blue House said in a press release.

At the press conference after the summit, Moon expressed his appreciation for Finland’s hosting of two dialogues involving experts and government officials from the two Koreas and the United States last year. The Finnish leader said he appreciated Moon’s efforts for peace and promised Finland’s help if there is any need.

Amid the stalled denuclearization negotiations between Washington and Pyongyang since the collapse of a second summit between U.S. President Donald Trump and North Korean leader Kim Jong-un, Moon has been putting efforts into jumpstarting the talks. He is expected to promote his plan throughout his current tour of Northern Europe and an upcoming trip to Japan to attend a Group of 20 Summit.

“Concerns are high about a deadlock because the Hanoi summit ended without a deal,” Moon said. “But Trump and Kim are continuously expressing their trust and intentions to talk.

“The momentum for dialogue is maintained,” he continued. “Talks to have negotiations between the two Koreas and between the North and the United States are taking place. I believe the inter-Korean and North-U.S. dialogues will soon resume.”

Moon also said Finland had the experience of arranging a summit between Trump and Russian President Vladimir Putin, but third-party mediation is not necessary for a third Trump-Kim summit because Pyongyang and Washington are talking. “But if there is a need for help, we will always ask Finland to help,” Moon said.

After their exclusive meeting, the two leaders had an expanded summit accompanied by top officials from the two governments. They discussed a plan to expand exchanges to nurture start-up companies in the two countries and a plan to strengthen their capabilities for the fourth industrial revolution. The two leaders also agreed to strengthen bilateral cooperation in information and communication technology, such as 5G communication, artificial intelligence, big data and Internet of Things.

In Finland, Moon was accompanied by a delegation of businessmen from major start-ups in Korea.

Moon is also scheduled to visit the research area of Otaniemi, the largest hub of advanced technology, innovation and business in Northern Europe, comparable to Silicon Valley in the United States.

Moon and Niinisto also agreed that active exchanges between the people of the two countries are the basis of improving bilateral ties. To this end, they agreed to open a new direct air route between Busan and Helsinki.

According to the Blue House, the two countries signed a memorandum of understanding that a Busan-Helsinki route will be operated starting in March 2020. Three weekly flights will be offered and it will be the first direct route to Europe from Gimhae International Airport. According to the Blue House, Moon also expressed the hope of expanding defense industry cooperation with Finland, an importer of Korea’s K9 self-propelled artillery system. In March 2017, Korea signed a $150 million deal with Finland to sell 48 used K9 artilleries from 2017 till 2023.