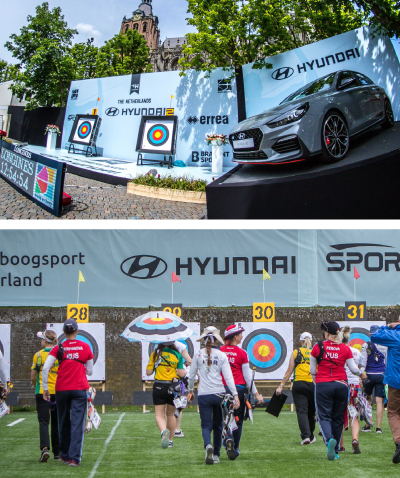 Top, Hyundai Motor’s i30 Fastback N is exhibited at the Hyundai World Archery Championships, which kicked off Monday in the Netherlands. Above, athletes participate in the competition. [HYUNDAI MOTOR]

The Hyundai World Archery Championships kicked off Monday in the Netherlands and will run through Sunday.

The event is organized by the World Archery Federation and sponsored by Hyundai Motor. While the competition is one of largest archery events and held since 1931, it added the Hyundai name in 2016 as the automaker became the title sponsor.

According to Hyundai, this year’s competition will be the largest ever, with 610 athletes from 92 countries participating.

With Hyundai as the main sponsor, it provided cars for transport, including the Tucson SUV and i30 hatchback.

Hyundai will maintain its title sponsorship through 2021.

Chung Mong-koo, his father and Hyundai Motor Group chairman, served as the chairman of Korea Archery Association from 1985 until 1997 and remains its honorary chair.