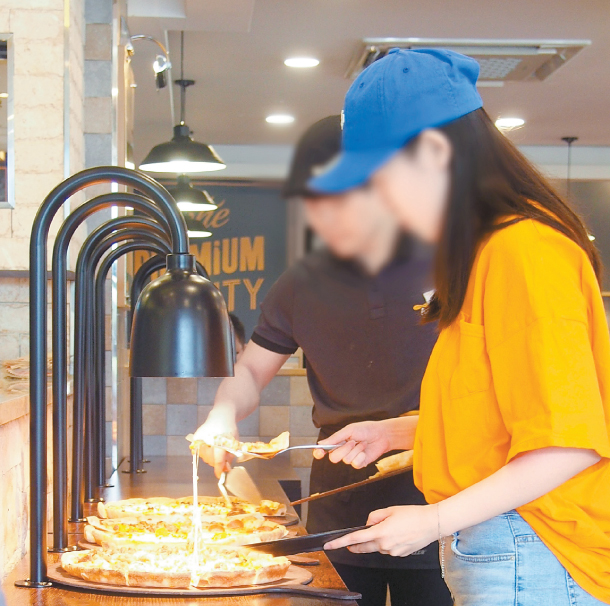 Mr. Pizza is staging a comeback.

Last Friday, at a Mr. Pizza branch at Yatap Station, Gyeonggi, its 30 tables were almost all occupied at1:00 p.m. It is rare for an establishment like this to be full at lunch time on weekdays, especially as it is near a station where options are abundant.

“Since the change in January, the number of customers have increased,” said store owner Lee Dong-ju, 54.

Lee changed the restaurant to buffet style in January after consulting with Mr. Pizza headquarters. Pizzas are now offered all-you-can-eat, with salad and beverages free.

It hasn’t been easy for Lee despite the increase in sales. As his costs are up, his margins are being squeezed. Raw materials are now 42 percent of sales.

Lee said that, in the food-service industry where delivery food is dominant, the only way for cafe-style store to survive is to lower its prices. The sales of the store in May increased 46 percent, and delivery fell 20 percent.

“The ratio of store sales to delivery changed from six to four, to seven to three after the change,” explained Lee.

Marketing has been adjusted. He reduced advertising on delivery food apps like Baedal Minjok or Yogiyo, and instead distributed flyers around subway stations.

“I distributed 400 papers a day, and around 10 groups on average a day said that they came by after seeing the flyer,” said Lee. “It was surprising. I realized that just because online marketing is mainstream, promoting our restaurant via online advertisements all the time is not the answer.”

An official from the Mr. Pizza headquarters said the stores that have made the change had a 20 to 30 percent increase in sales. Overall company sales last month decreased 9.4 percent compared to the same period last year.

Mr. Pizza has started to renew its restaurants as pizza buffets since the second half of last year. Among 272 stores, 29 have already completed the change. By the end of the year, 90 stores will have made the transformation.

“Changing a store costs 50 million won to 60 million won, but due to economic downturn, it is hard for store owners to boldly invest, so owners are conducting targeted renewal where only necessary parts are changed,” said a team leader of a project which aims to revitalize Mr. Pizza stores.

The transformation of Mr. Pizza is a matter of survival.

After Mr. Pizza Chairman Jung Woo-hyun assaulted a security guard in 2016, the company experienced a loss for four years straight. If it is unable to make a profit, the company could be delisted on the Kosdaq. The number of stores before the incident totaled 430, but now only 60 percent of them are left.

“If the stores are alive, the headquarters can be revived. That is why we changed the stores at minimal cost,” explained a company official.

The price of cheese was lowered as well. The official from the headquarters said that the price of 10 kilograms (22 pounds) of cheese is currently 84,700 won, down from 87,395 won.

With survival at stake, cooperation between the headquarters and the stores has improved significantly.

“When we opened the business 11 years ago, the cost for store sign was 33 million won, but now it is 12 million won,” said store owner Lee.