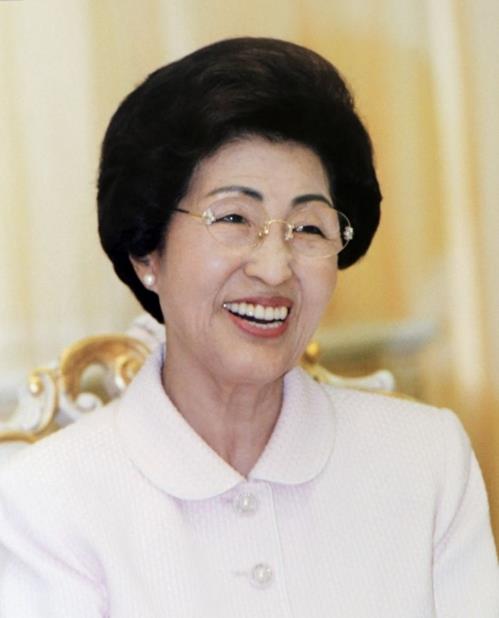 Lee had been hospitalized at a Seoul hospital while battling liver cancer.

Lee served as chair of the Kim Dae Jung Peace Center, which was founded by her husband to promote inter-Korean reconciliation and world peace, and fight global poverty.

Lee accompanied her husband to Pyongyang in 2000 for the historic first inter-Korean summit with then North Korean leader Kim Jong-il.

After her husband's death, Lee made two more trips to North Korea, in 2011 and 2015, to continue to push for inter-Korean reconciliation.

In December 2011, Lee visited the North to pay her respects upon the death of then-leader Kim Jong-il. "I hope our visit will contribute to improving inter-Korean ties," she said at the time.

The conservative administration of then-President Lee Myung-bak did not send an official delegation to the funeral amid heightened tensions between the sides.

The former first lady's visit was highly symbolic as she became one of the first South Koreans to meet with Kim's successor and son and current leader Kim Jong-un.

The two did not meet, but Lee visited various children's hospitals and daycare centers in Pyongyang, where she delivered medicine and children's hats that had been knitted by members of her own humanitarian aid organization.

"As I held the hands of the innocent children, I thought to myself that we must not pass down the pain of (inter-Korean) division to future generations," the former first lady said after returning from the four-day visit.

Lee had been hospitalized since March. Her condition sharply worsened Saturday, but had somewhat stabilized since, according to her aides.

In April, Kim Hong-il, a former lawmaker and the eldest son of the former president by his previous marriage, died at 71.

Lee was not informed of his death at that time as her aides were worried about her health. She is survived by one son with her husband, Kim Hong-gul.

Before her marriage in 1962 to Kim, whose first wife died several years earlier, Lee taught at her alma mater, Ewha Womans University, and worked as a women's rights activist.

She actively supported her husband's political career and they endured various trials together, including his death sentence, subsequent exile to the U.S., and house arrest under military rule in South Korea in the 1980s.

To appeal for her husband's release, Lee also wrote a letter to then-U.S. President Jimmy Carter.

As first lady, she has been credited with helping expand the number of women's jobs in the public and political sectors.

A funeral has been planned for Friday and she will be buried at the Seoul National Cemetery.

President Moon Jae-in expressed his condolences on Twitter and Facebook while on a state visit to Helsinki, Finland.

"Today we are seeing off a great person who dedicated her entire life to women," he wrote. "Beyond being the wife of President Kim Dae-jung and a first lady, she belonged to the first generation of women's rights activists in the Republic of Korea."