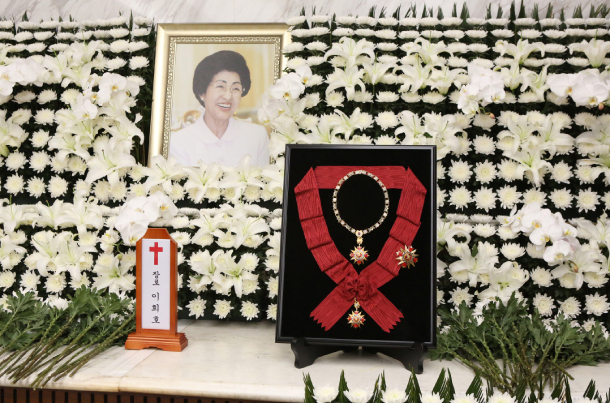 The mourning altar for the late Lee Hee-ho set up at Yonsei Severance Hospital in Sinchon-dong, western Seoul, on Tuesday. [KIM SANG-SEON]

Lee Hee-ho, a feminist pioneer, democracy champion and widow of former President Kim Dae-jung, died at the age of 97.

Lee, a devoted Christian, passed away peacefully at 11:37 p.m. Monday surrounded by her family, Kim Seong-jae, an official of the Kim Dae Jung Peace Center, said in a press conference on Tuesday.

“The family members were reading aloud the Bible, praying and singing hymns,” he said. “Lee also sang with them until her last minute.“

“Throughout her life, she was always on the side of the people in need, the weak of society,” he said. “As chairwoman of the Kim Dae Jung Peace Center, she had continued to work for peace for the two Koreas until her last day.”

President Moon Jae-in, who was in Finland, issued a message shortly after Lee’s death, saying the country has lost a great soul who devoted her life to the causes of women and democracy. “Before she was the wife of a politician and President Kim Dae-jung, she was a first-generation women’s rights advocate of our country,” Moon said. “Not only was she a democracy activist, but she also played a key role in the launch of the Ministry of Gender Equality under the Kim Dae-jung administration.”

Lee left a will saying she would pray in heaven for the Korean people and the peaceful unification of the two Koreas, according to the Kim Dae Jung Peace Center.

Her will dictates that the family’s residence in Donggyo-dong, southern Seoul, be used as a memorial to the late president. The Nobel Peace Prize award money that Kim had received in 2000 for his “Sunshine” engagement policy with North Korea will be used to fund a memorial project, her will said.

Lee wrote the will last year, according to the center. She had been hospitalized at Severance Hospital in Sinchon-dong, western Seoul, since March with deteriorating health.

Lee married Kim in 1962 and supported him throughout his political life. Kim, who died in 2009, won the presidency in 1997, years after the country’s democratization after decades of dictatorship. When Kim had a historic summit with North Korean leader Kim Jong-il in 2000, Lee traveled to Pyongyang alongside him.

The Kim Dae Jung Peace Center said a five-day mourning period will be observed, and visitors started paying their respects at a mourning altar in the hospital starting Tuesday morning.

The Blue House sent a delegation led by Chief of Staff Noh Young-min. Top government officials including Prime Minister Lee Nak-yon and heavyweight politicians from the ruling and opposition parties all paid condolences.

A funeral preparation committee chaired by Prime Minister Lee, former acting Prime Minister Chang Sang and Kwon Rho-kap, adviser of the Party for Democracy and Peace, was launched Tuesday. Leaders of five political parties including the ruling Democratic Party and the main opposition Liberty Korea Party will join the committee as advisers. Hundreds of politicians and social leaders said they will also join the committee.

A funeral procession will start at 6 a.m. Friday at the hospital, and the funeral will take place at 7 a.m. at the Changcheon Methodist Church in Sinchon-dong, where Lee had attended services throughout her life.

She will be buried next to the grave of the late President Kim at the National Cemetery in Dongjak District, southern Seoul. She is survived by two sons. While many remember her as the wife of the late Kim, Lee was a vigorous civic and women’s rights advocate on her own.

Lee was born on Sept. 21, 1921, to a rare modern family in Korea. Her doctor father gave her a generational name, which was usually only given to sons.

“Although I was born in an era in which sons were unconditionally preferred, I was lucky to have three elder brothers and largely welcomed to be born as a daughter,” Lee wrote in her autobiography.

Lee’s mother was passionate about educating her daughter, but died when Lee was 18. Lee decided she would not marry until she finished her studies.

After studying at the Ewha Womans University and Seoul National University, Lee went to the United States and earned a master’s degree in sociology from Scarritt College for Christian Workers in Tennessee.

Lee met Kim Dae-jung in Busan in 1951 during the Korean War. At the time, Lee was campaigning for women’s rights, and Kim was a businessman operating a maritime company. The late president once recalled that Lee was a “cheerful woman with intelligent eyes,” and he used to feel small before her. He, however, said one thing was sure: They agreed on almost everything.

Kim was married and a fledgling politician. He lost three legislative elections in a row and his wife passed away. Lee was secretary of the YWCA, and she and Kim had heated discussions about politics.

Kim asked her to marry him, and Lee accepted. “I had faith that supporting him would make sure that we will realize a big dream,” she said later. Many tried to stop her because Kim was a widower with two children and had no money. Lee married him in 1962.

Only 10 days after their marriage, Lee witnessed Kim’s arrest by the Korea Central Intelligence Agency for an alleged antistate activity. Their marriage would withstand many such ordeals.

Kim was arrested again in 1976 with other activists, and Lee created an association of prisoners’ families, cooperating with their wives. She also led a demonstration to fight against the authoritarian government’s oppression of democracy and press freedom.

She regarded Kim as a comrade in the democratization movement. When Kim was imprisoned in Jinju Prison in South Gyeongsang in 1977, Lee refused to use the heaters in her own house in solidarity with him. One time, she passed out while praying in an ice-cold room.

After Kim was sentenced to death by a military court in 1980, Lee wrote a letter to him. “Because your life is never easy, I love you more and respect you more. … You have a particularly strong love for your country and the people. This is probably why you are facing these ordeals.”

After the Constitution was amended to introduce a direct presidential election system in 1987, their life became drastically different. Instead of supporting an incarcerated Kim, Lee joined his election campaigns. She toured the nation with Kim, who ran in the presidential election later that year. She gave a speech in Seosan, South Chungcheong, and media praised her.

After Kim suffered a presidential election defeat in 1992 to Kim Young-sam, he decided to retire from politics. Lee helped Kim write his farewell to politics.

But Kim returned and finally won the presidency in 1997. She proposed that she be called Madame Lee Hee-ho rather than the first lady. “Before I was the wife of the president, I was myself,” Lee said. “I am also old enough, so I want to be called a madame.”

While the couple was in the Blue House, she contributed to the introduction of a law on gender equality and the creation of the Ministry of Gender Equality. Lee also paid special attention to issues involving children. She published a collection of her letters to Kim when he was in prison, and proceeds were used to subsidize meals for children from families suffering the aftermath of the Asian financial crisis.

While the world often described Lee as the wife of a famous dissident, Kim used to describe his life by talking about Lee.

While in exile in the United States in 1983, Kim held a lecture in San Francisco. “If it weren’t for my wife, I would have never imagined what I have become today,” he said. “It is possible for me to be here with you today because of my wife, and I am standing here as the husband of Lee Hee-ho. I am so proud of it.”