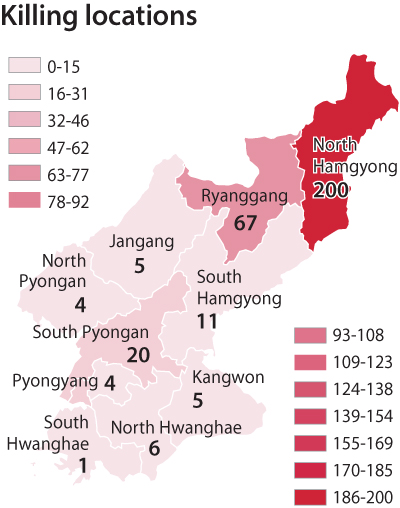 The Transitional Justice Working Group (TJWG) on Tuesday released a report, titled “Mapping the Fate of the Dead: Killings and Burials in North Korea,” that documented 323 locations in the secretive country where state-sanctioned killings occurred, often without any due process.

The group said it compiled the report based on 610 interviews with North Korean defectors over a period of four years, combined with the use of mapping technology to identify the sites where executions allegedly took place.

Offenses that warranted execution include murder, economic crimes like the stealing of copper, cows or other property, and also included political crimes such as “anti-revolutionary behavior.” Some interviewees, the report said, alleged that certain individuals were killed for watching South Korean videos.

The executions were almost all carried out by a firing squad and many took place in front of an audience of assembled ordinary people, often numbering in the hundreds, in places like riverbeds, marketplaces or schools. In some cases, crowds of over 1,000 people were assembled to witness executions, which included children as young as 7 years old, the report said.

In many cases, the killings took place after a brief show trial in which the accused were convicted and sentenced without legal representation. People assembled to witness executions were searched for mobile phones or other devices to prevent recordings, the report added.

North Korea is known to have carried out several high profile public executions after its leader, Kim Jong-un, rose to power in 2011, the most prominent being the killing of his uncle, Jang Song-thaek, in 2013. Last week, a South Korean local outlet claimed that the diplomat who led the North’s nuclear negotiations with Washington was rumored to have been executed as a result of the failed second summit between Kim and U.S. President Donald Trump, though doubts have been raised about that report.

A United Nations (UN) human rights report in 2014 alleged that a vast number of human rights violations, like public execution or confinement in political prison camps, were taking place in the North as part of the state’s attempt to “terrorise the population into submission.”

While its report alleged similar things, TJWG acknowledged that its findings were not definitive because of its inability to access the country or consult potential witnesses who could corroborate the alleged abuses.

The group also said the survey may not be representative of what is happening around the entire country, as the majority of those interviewed in the TJWG report were women and more than half the respondents hailed from North Hamgyong Province, which produces the greatest number of defectors because of its proximity to China.

The report claimed that 83 percent of all interviewees said they had witnessed a public execution, while 16 percent had family members who were killed in such a manner.

“Most North Korean citizens continue to follow traditional burial practices where scarce resources allow,” said Dr. Sarah A. Son, the lead author of the report. “However, interviewees told us the bodies of individuals killed by the regime are not usually returned to family members, nor are the burial locations revealed to families.”

For its part, North Korea refuses to admit accusations of human rights abuses raised by the UN and other international organizations. Last month, the North’s ambassador to the UN, Han Tae-song, brushed off calls that prison camps be shut down in his country, claiming Pyongyang has made a “devoted effort for the good of the people.”