Busan goes all out to prep for BTS events

Busan goes all out to prep for BTS events 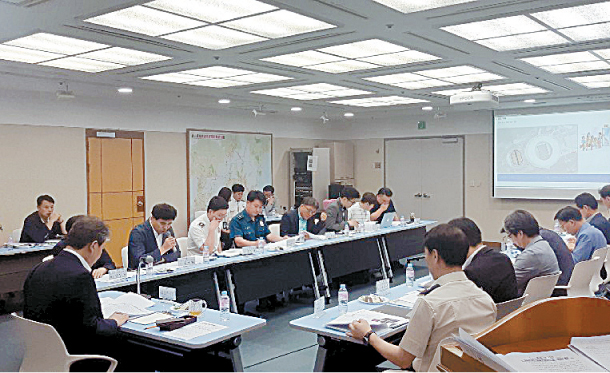 Officials of the Busan city government hold a meeting on Monday solely to discuss the BTS events this weekend. [BUSAN CITY GOVERNMENT]

BTS’s visit to Busan this weekend has city officials scrambling to prepare as tens of thousands of people from all over the world are expected to descend on Korea’s largest coastal city to see the K-pop phenomenon.

The seven-member boy band will hold two fan meeting concerts in Busan. Both events will be held at Busan Asiad Auxiliary Stadium from 7 p.m. to 9:30 p.m., once on Saturday and once on Sunday. Each event will be attended by 22,500 people, according to the Busan metropolitan government. Tickets are sold out.

The Busan government hosted a meeting on Monday solely to discuss the BTS events. The city government decided to operate extra subway trains over the weekend, deploy police officers around the stadium for safety and traffic control, secure thousands of parking spaces to prevent illegal parking and welcome BTS fans with purple lighting across the city. Purple symbolizes BTS and its fan club, ARMY.

According to Busan officials, fans will be allowed to wait inside Busan Asiad Main Stadium before the fan meetings begin. At least 18 more trains will run on three subway lines after the concerts and at least 3,282 additional parking spaces will be prepared around the stadium. Around 200 Busan police officers will also be mobilized for safety and traffic control.

Busan firefighters will set up an emergency medical care center at the concert hall in case fans faint or collapse from dehydration, said the city government. To welcome visiting ARMY fans, the city government will also light up several landmarks in purple this week through Sunday, including Gwangan Bridge, Busan Harbor Bridge and Busan Cinema Center.

Two booths will be set up near Busan Asiad Auxiliary Stadium, where the events will be held, to promote Busan and sell Busan souvenirs.