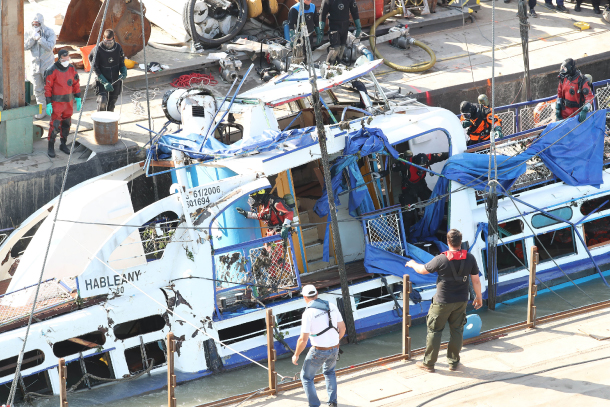 A joint rescue team from Korea and Hungary searches inside the Hableany, the sightseeing ship that sunk on May 29 in the Danube River, after the ship was salvaged on Tuesday. [YONHAP]

The Hungarian sightseeing boat carrying Korean tourists that tragically sank in the Danube River in Budapest nearly two weeks ago was salvaged Tuesday, leading to the immediate discovery of four more missing bodies.

The Hableany, which sank near Margaret Bridge in the Danube River in Budapest, was lifted by a large floating crane, the Clark Adam, after operations to fasten four cables to the hull of the vessel were completed the previous day.

Hungarian authorities began lifting the wreck around 6:40 a.m. local time. The wheelhouse of the boat could be seen above the surface of the water within half an hour and the deck and cabins were in view within two hours.

The Hableany, or Mermaid, carrying 33 Korean tourists and two Hungarian crew capsized on the evening of May 29 after it was struck by a larger Swiss ship, the Viking Sigyn, helmed by a Ukrainian captain. Seven survivors were rescued immediately after the sinking and seven bodies recovered.

Efforts to recover the missing 19 have taken place over the past 13 days, and 11 were recovered, including a Hungarian crew member. Ahead of the salvage operation Tuesday morning, seven Koreans remained missing along with the captain of the vessel.

Three bodies suspected to be Korean victims were discovered by divers in the boat’s cabin area less than two hours into the lifting of the wreckage, according to the Hungarian Counter Terrorism Centre (TEK) and the joint rapid response team.

The three bodies were found minutes of each other, a little after 8 a.m., and included a body presumed to be a child, the Korean Foreign Ministry said in a statement Tuesday.

Another body suspected to be the Hungarian captain was found in the wheelhouse.

Hungarian rescue workers attached a fifth cable to the vessel some three hours into the lifting process, after authorities discovered the back of the vessel had been damaged, to help with stability, delaying the operation.

Authorities initially estimated it would take at least four hours to lift the boat, drain the water and place it on the barge. The salvage operation was still taking place as of press time Tuesday evening. The operation was delayed several days as the large crane, the Clark Adam, had to wait out high tides to pass under several bridges across the Danube River to reach the site of the accident.

More bodies are expected to be discovered once the boat is drained of water and rescue workers can enter the body of the vessel. The recovered bodies will be moved to a local hospital.

Hungarians have been leaving flowers and letters and lighting candles at night at a makeshift altar for the victims at Margaret Bridge.

The bodies of several victims were returned to Korea Monday. Two survivors have also returned home.

In a meeting at the government complex in central Seoul on Tuesday, Korean Prime Minister Lee Nak-yon called for related agencies to provide support for the funeral process for the victims as well as psychological treatment for the survivors.

“A part of the vessel has been salvaged, and we will continue to observe and prepare for the search in the ship and for variables that can occur,” Kang Hyung-shik, a Korean Foreign Ministry official overseeing overseas management, said in a briefing in Seoul early Tuesday afternoon.

“After the return of the family members, we will work with related agencies including the Ministry of the Interior and Safety and the Ministry of Health and Welfare for funeral procedures to make sure to provide administrative support.”

Kang added that psychological treatment will be offered to victims and family members through trauma centers.

The Viking Sigyn, the ship that collided with the Hableany, returned to Hungary Monday, freshly painted and repaired, leaving no signs of dents from the accident last month. Hungarian police inspected the ship Monday.

The Viking Sigyn left Budapest two days after the fatal accident and returned for a scheduled trip. Yuri C., the captain of the Viking Sigyn, accused of negligence that caused the accident, was granted conditional bail by a Hungarian court. Kang told reporters, “We have been requesting Hungarian authorities for a thorough investigation into the cause of the accident and for those responsible to be punished accordingly, as well as for appropriate compensation to happen.”