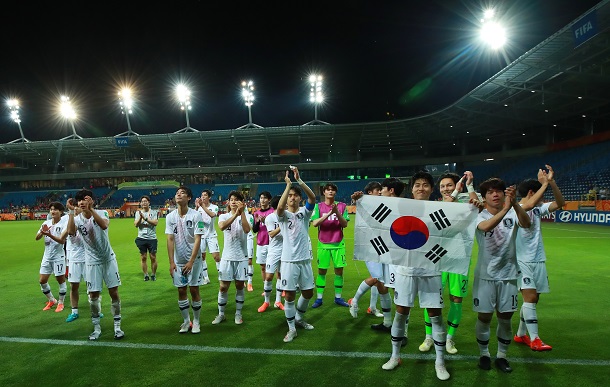 Korea's U-20 football team celebrates after winning the semifinals against Ecuador at Lublin Stadium in Poland on Tuesday. [YONHAP]

With a 1-0 victory over Ecuador on Tuesday night, Korea’s U-20 squad became the first Korean men's team at any level to ever reach the final of a FIFA World Cup.

Korea’s only goal in the U-20 World Cup semifinal at Lublin Arena in Poland came in the 39th minute, as Choi Jin scores with an assist from Lee Kang-in.

Neither team was able to find the back of the net for the rest of the game, although it wasn’t for want of timing. Ecuador tested the Korean goalkeeper, with 13 shots, five of which were on target, throughout the game. Korea had just two shots on target.

Ecuador also came on top in terms of possession, with control of the ball 61 percent of the time, but weren’t able to make it count.

Both teams had goals ruled offside within the last few minutes of the game.