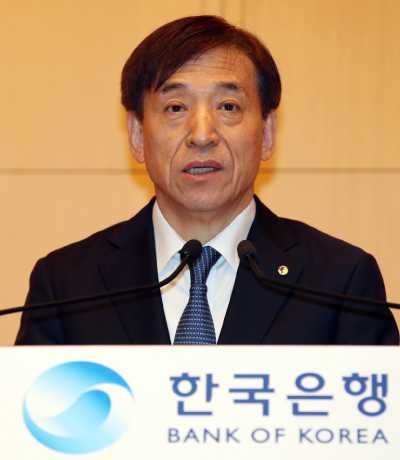 The central bank governor hinted at a potential interest rate cut on Wednesday, a reversal of his previous stance.

“As external uncertainties increased because of the trade dispute between the United States and China and the weakening semiconductor industry, [the BOK] should respond appropriately to deal with changes in economic conditions while closely monitoring the evolving developments and the effects of them,” Lee said in a speech celebrating the 69th anniversary of the bank’s foundation.

The remarks were a clear departure from only two weeks ago when Lee ruled out the need for a 25 basis points cut to bring the policy rate to 1.5 percent from its current 1.75 percent.

“I know there have been expectations for a rate cut,” he told reporters on May 31 after a rate-setting meeting. “But if you look at both the macroeconomy and financial stability, it’s not the time to respond with a rate cut to deal with the situation.”

At the May meeting, the central bank kept the benchmark interest rate unchanged in line with market expectations.

But one of its board members advocated a cut.

Korea’s economic growth in the first quarter was negative 0.4 percent compared to the previous quarter, according to a BOK revised report on June 1, the lowest growth on a quarterly basis since the final quarter of 2008, at the peak of the global financial meltdown.

The country’s current account suffered a deficit in April for the first time in seven years.

Exports dropped 16.6 percent in the first 10 days of June, mainly due to decreased shipments of semiconductors, one of the country’s key export products, according to the Korea Customs Service.

The administration of U.S. President Donald Trump vowed to increase tariffs on Mexican imports last month and terminate duty-free imports from India on about 2,000 products. But the Trump administration dropped its tariff threat on Mexico over the weekend as a part of a deal with Mexico on immigration.

Against this backdrop, U.S. Fed Chairman Jerome Powell’s speech last week bolstered expectations for an interest rate cut in the United States and now the probability of a cut in July has reached 80.6 percent, according to the CME Group’s FedWatch tool.

James Bullard, head of the Fed’s St. Louis bank, said earlier this month that a Fed rate cut “may be warranted soon” because of the risks connected with the trade friction.