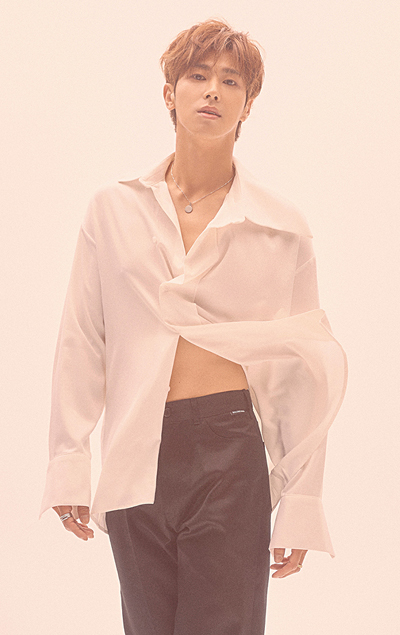 K-pop legend U-know Yunho is finally going solo after 15 years in the spotlight.

On Wednesday, Yunho released his very first solo EP, “True Colors.” For almost half his life, the 33-year-old singer has been performing as part of TVXQ, the boy band-turned-duo that heralded a new generation of K-pop in the early 2000s.

“I’m more nervous that I thought I would be,” the veteran singer said as he greeted the press at his album showcase ahead of its release on Wednesday. “I feel like I’m debuting again, but I think it’s good to be excited by a new beginning.”

Being the first solo release from one of SM Entertainment’s oldest and most popular artists, Yunho and his management agency went all out to get the best in the industry to work on the EP. The release’s colorful cast of producers and musicians include Thomas Troelsen, who’s written songs for Justin Bieber and David Guetta, producing duo LDN Noise and composer Andrew Choi. BoA, Yunho’s close friend and fellow SM Entertainment artist, as well as rapper Giriboy are featured on the songs “Swing” and “Hit Me Up.”

The EP includes a total of six tracks, each highlighting different emotions and vocal styles. “Swing,” for example, is associated with the color red to emphasize the romantic tensions between a woman and a man, while “Change the World,” the last song on the EP, is paired with white for the positive energy of its lyrics.

“The message I wanted to share is that there are different colors in life,” Yunho said. “The public thinks of me as a performer, but I also wanted to show them the type of music I like and change my vocal tones with each song. I want people to see how I have matured from the little boy they first saw me as.”

The album’s lead track “Follow” has Yunho staying true to his image and is an opportunity for the singer to put on a powerful performance. 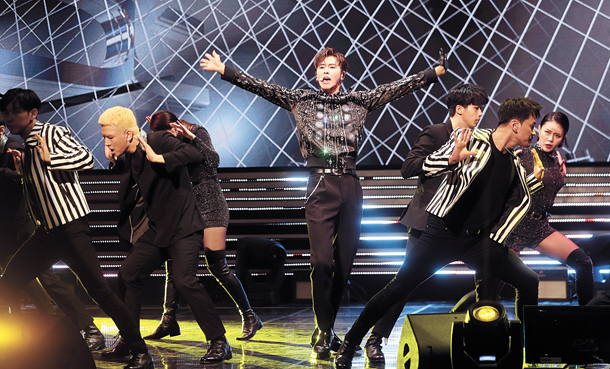 TVXQ member U-know Yunho performs “Follow” at a showcase event for his first-ever solo EP “True Colors” ahead of its release on Wednesday at a theater in eastern Seoul. “True Colors” is a six-track EP that features singer BoA and rapper Giriboy. [YONHAP]

The song is a dark pop dance track strongly reminiscent of TVXQ’s 2008 hit “Mirotic” - both songs were composed and written by Troelsen and Yoo Young-jin. “Follow” starts with a binding spell-like chant from Yunho, and is followed by a chorus that repeatedly says “Follow me” against heavy beats. In the music video, the singer wears a dazzling, Michael Jackson-esque outfit and shows off his dancing skills with robot-like precision, all while maintaining a fierce expression on his face.

The song is not intended to only be dark and serious. Yunho said he tried to add points of humor into the choreography by adding Thanos’ famous snap and other signature moves from the heroes in “Avengers: Endgame.”

At the showcase, Yunho demonstrated the “Follow” choreography to the press. It was easy to see how much of a physical challenge the intricate moves were for the singer when Yunho came back on stage soaked in sweat and panting heavily after the performance to answer questions.

“As you can see, I don’t dance half-heartedly,” the singer joked.

In addition to being known as a talented dancer, Yunho also has a reputation for being one of the most hard-working singers in the industry.

In an episode of MBC’s “I Live Alone,” a reality show that follows celebrities in their daily lives, Yunho demonstrated that he likes to turn on videos of his own performances in the morning and practice choreography as soon as he wakes up. The singer has shown his unwavering passion for his work and a generally optimistic attitude in his other TV appearances, earning him nicknames like “the icon of passion.”

“I’m really thankful that people have that image of me,” Yunho said. “One day when I was walking on the street, a businessman around my age asked me for a handshake, telling me that he was encouraged by me.”

Yunho’s path wasn’t always so rosy and smooth. When TVXQ debuted in 2004 as a five-member boy band, it was an overnight sensation, as the band members’ model-like looks, elaborate choreography and catchy songs quickly grabbed people’s attention. At the height of their popularity in 2010, however, three of the members, Kim Jae-joong, Kim Jun-su and Park Yoo-chun, broke away from the band to form JYJ after disagreements with SM Entertainment.

Although TVXQ was left with just Yunho and bandmate Max Changmin, the duo continued to release music regularly and perform in concerts, including in Japan, where they still enjoy tremendous popularity.

“I think a singer’s popularity is mostly based on luck,” he said. “There are people who invest a lot to attend my concerts, and that becomes inspiration for me.”

“I’ve also started interacting more through social media, because I made a promise with fans after returning from the army,” the singer added. Yunho was discharged from his mandatory military service in 2017. “I’m a bit [old school], but I’m trying to do things that people do nowadays like vlogs.”

Fans can be assured that they will continue seeing more of Yunho both online and on stage because the singer said he has no plans to stop anytime soon.

“Park Jin-young is still dancing. Michael Jackson danced until 50. And I plan on dancing until 51,” the singer laughed.