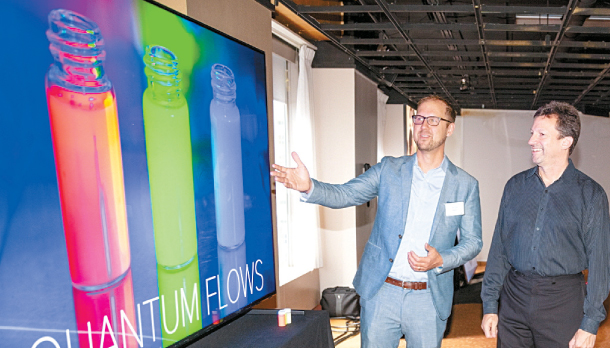 Samsung Electronics attended the 8K Display Summit in New York, introducing its latest products to the 100-plus guests attending.

At the gathering, the company featured its 8K resolution panels and discussed the state of the market. Samsung first offered the super-high-definition screens last year, but demand has been weak as very little in the way of programming can fully utilize the resolution.

8K resolution offers four times the number of pixels as a 4K screen and 16 times a full HD television.

Among technologies the company introduced at the summit, attendees were particularly interested in methods that can improve lower-resolution material for viewing on the 8K screens. The AI upscaling technology fills in pixels so that the image is rendered using all available pixels. 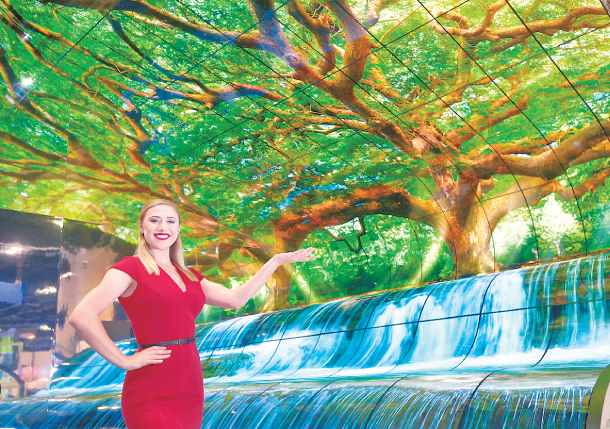 A model poses next to an LG Electronics flexible display set up at InfoComm 2019 held in Orlando, Florida. [LG ELECTRONICS]

The company announced the recent activities of the 8K Association, a group of global display brands formed earlier this year to promote the relevant technology and the market expansion of 8K televisions. Its members include Samsung, Panasonic, TCL and HiSense. Since its first public seminar at the NAB Show, an annual trade show by the National Association of Broadcasters, in Las Vegas in April, the 8K Association has been pushing plans to increase membership and standardize 8K technology.

LG Electronics pushed its digital signage in the United States. On Wednesday, the company showcased products at InfoComm 2019, a trade show held in Orlando, Florida, in which more than 1,000 companies took part. LG introduced a number of digital sign products using LED screens.

A product LG showcased for the first time at the event was Micro LED Signage, which utilizes LEDs that measure less than 50 micrometers. Another showcased product was Open Frame OLED Signage, which doesn’t come with a frame and therefore can be easily bent. This is also possible because, unlike LCDs, LEDs can emit light on their own and do not require a backlights.

Transparent OLED signage was displayed as well. Videos can be watched on the screen as the scene behind is viewed. LG organized its demonstration booth to show how the signage can be used. The transparent signage, for example, was put in front of a larger OLED video wall to present a 3-D image to visitors.