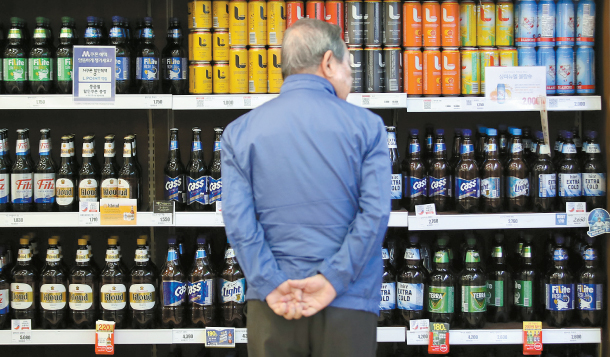 Drinkers are mad. They’re just not sure at whom.

With alcohol prices rising fast, after a series of increases, it’s not clear who to blame. It could be the drink manufacturers. It could be the restaurant owners. Or it could just be the economy in general.

Starting in March, local soju and beer makers announced an increase in factory prices of their products. With market leaders Oriental Brewery and Hite Jinro going first, smaller competitors fast fell into line. Lotte Liquor already made the adjustment to the factory price of its popular Chum-Churum soju and Kloud beer, which went into effect this month.

Bars and restaurants are following suit.

They are increasing the prices of their drinks by 1,000 won ($0.90) or more, making the sales price stand at 5,000 won or higher, and consumers are not at all happy. Alcoholic beverage prices are a sensitive matter, especially when it comes to soju, and even the smallest changes can lead to a strong backlash.

While some blame the companies for ratcheting up the factory prices of the drinks, others argue that the rise at bars and restaurants is out of whack with the increased costs.

Oriental Brewery was the first to make a move. In March, the company announced the increase in the price of its beers, like Cass and Capri, by an average 5.3 percent - the first in two years and five months. A 500-mililiter (16.9-ounce) Cass bottle was upped by 4.9 percent. Hite Jinro, which is behind the best-selling Chamisul soju, raised the factory price of the 360-mililiter soju bottle by 6.45 percent starting in May to 1,081.2 won. It was the first increase in three years and five months. The price of Lotte’s Chungha was increased 8 percent to 1,589.5 won for a 300-mililiter bottle, the first increase of Chungha in seven years.

Those who blame the restaurant owners generally argue that the adjusted price at these establishments jumped by 25 percent, while the price increases from the companies was only around five percent. But business owners say the situation is complicated.

“The 1,000 won increase on soju and beer at bars and restaurants reflect a lot of things, not just the recent increase of the factory price of alcoholic beverages,” said a bar operator who runs a business in western Seoul.

“Over the past two years, I had to raise the minimum wage of temporary workers by several thousand won. How about the general price increase of the ingredients for free snacks? Price increases of specific ingredients, like onions or red pepper powder is never publicly announced, so people just don’t know about it. But the alcohol price is publicly announced, and therefore, considered a chance for business operators to make up for the losses incurred from other economic factors.”

The minimum wage over the past two years has risen by almost 30 percent. It currently stands at 8,350 won.

Despite rising costs, some owners who operate businesses in less populated regions are forced to endure the losses.

“I heard restaurants in highly populated regions have already raised the price, but things are not like that for people like me who run the business in a less populated area.”

Alcohol prices are expected to remain a controversial topic for a while with the government overhauling the alcohol tax. Last week, it adjusted the tax on beer, so it is now based on volume and content instead of the cost of production as part of a broader overhaul to the alcohol taxation system.

Despite the revision, industry insiders say the change will have little to no effect on the price of drinks sold at restaurants or bars.