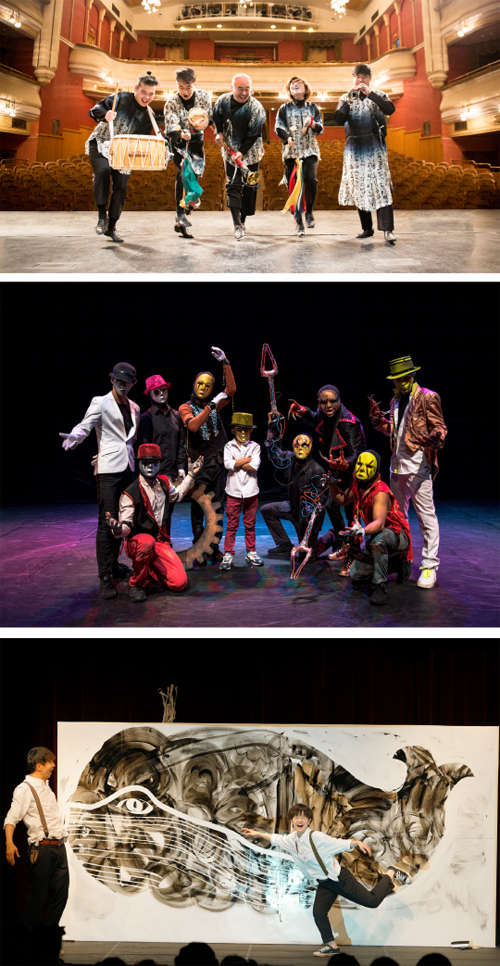 Several performing arts groups were invited to stage their works at the Jeju In Festival, which kicked off on June 7. The groups include, from top, Noreum Machi, Seoul Arts Management and Brush Theatre. [KOREAN CULTURAL & ARTS CENTERS ASSOCIATION]

SEOGWIPO, Jeju Island - A four day market has been organized at Jeju’s Haevichi Hotel & Resort, attracting hundreds of visitors to the southeastern part of the island. Those in attendance are not here to buy Jeju-specific items, but rather products of the arts, such as musicals, ballets, classical music concerts and art exhibitions.

About 190 booths were set up at this year’s Haevichi Arts Festival’s Art Market, which kicked off on Monday. Most of the visitors visiting the booths located throughout the hotel and resort are officials of arts centers across the country, and some are from overseas hoping to find some interesting shows to stage at their venues in the future.

This year marks the 12th edition of the festival, which is organized by the Korean Cultural & Arts Centers Association, an affiliate of the Ministry of Culture, Sports and Tourism. The event is also a festival and many performances and shows are held in Seogwipo for the general public throughout the duration, but the main objective of the event is to bring together the major players of Korea’s performing arts world.

About 180 arts centers across the country and 260 performing arts, art exhibition and art education groups are represented at this event, and those in attendance are hoping to exchange business cards and sign provisional contracts. The event ends today.

This year’s Haevichi Arts Festival is different because for the final day of the event, officials from arts centers and halls have set up their own booths in the Art Market so that arts organizations can approach them and inquire about opportunities.

“After holding this event for more than 10 years,” said Kim Hye-kyung, president of the Korean Cultural & Arts Centers Association, “we noticed that it would create more enthusiastic communication by having those from the arts centers stand behind the booths and let the art groups seek out the ones they are interested in to see if it works.”

“[In the past,] it was the art groups that just waited and waited until an official from a venue they were interested in showed up,” Kim added.

Another difference this year compared to previous years is that the organizers decided to include art exhibition groups to the Art Market, allowing them the opportunity to network and find potential exhibition halls to work with. 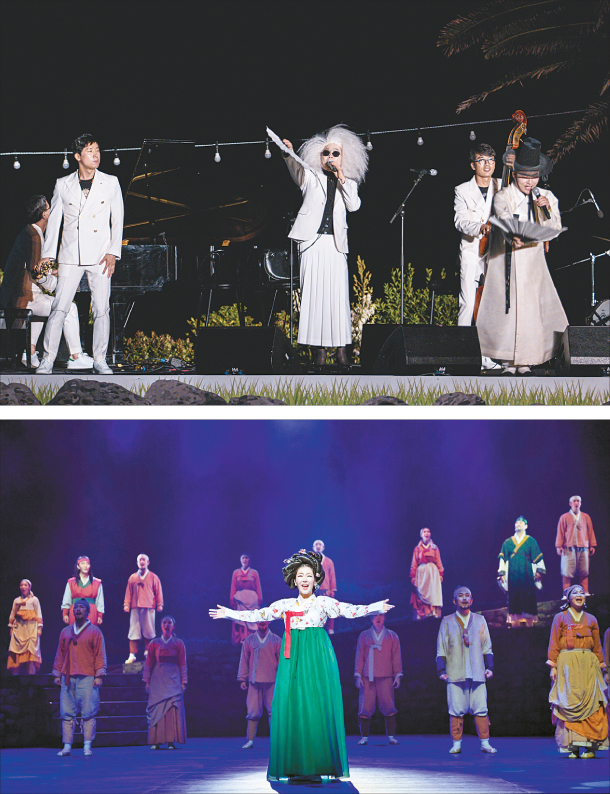 “Previously, the festival focused on performing arts,” said Kim. “But we believe we’ve reached a certain level with that and want to expand the scope a little more by including exhibitions and even education and make this festival a cultural expo. The festival seeks to stimulate the distribution and management of arts centers focusing on local culture, tourism and performance arts.”

The organizers also set up stages around the Haevichi Hotel & Resort to allow some groups to showcase their works live.

This year, 35 art groups including musical troupes, ballets and bands got to perform parts of their repertoires.

According to the Korean Cultural & Arts Centers Association, about 150 provisional contracts were signed during last year’s festival and it aims to increase that number to 200 this year.

“There are many festivals that get held in Jeju, and we are especially enthusiastic about the Haevichi Art Festival,” said Cho Sang-bum, director general of the Culture, Sports & International Affairs Bureau for the Jeju Special Self-Governing Province. “That is because, although this festival seems like it’s an event only for those involved in the arts world, it’s actually a festival that invites the people of Jeju and all the travelers who visit Jeju from Korea and other parts of the world.”

Cho said that every year, a special team from the bureau gets to work closely with the Korean Cultural & Arts Centers Association and makes sure that the festival includes various programs that offer things to see and experience for the general public as well.

Beginning June 7, four performing arts groups including Noreum Machi, Lee Hee Moon Company, Seoul Arts Management and Brush Theatre were invited to perform in venues like the Jeju Cultural Center, the Seogwipo Arts Center, the Jeju National Museum and others for the public to enjoy for free.

From June 7 to 16, a Fringe Festival is being held as well on the Haevichi Outdoor Stage on Pyoseon Beach, at the Pyoseon Myeon Office and at Place Camp Jeju. A total of 35 groups are participating in the Fringe Festival.

On Wednesday, the participants also had time to learn how other countries view the Korean arts world and how they could collaborate at the festival’s Cooperation Networking session. Three guest speakers were invited to talk about their countries, including Rick Heath from Performing Arts Connections Australia, Alain Pare from Cinars, International Exchange for Performers/Conference in Canada, and Zhu Kenning from the China Association of Performing Arts.