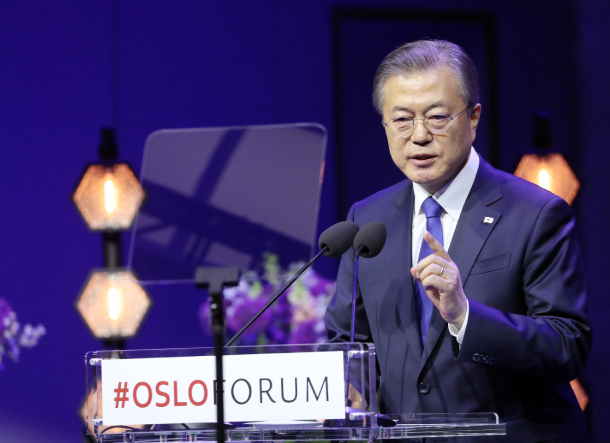 South Korean President Moon Jae-in on Wednesday delivered an address in Oslo in which he pledged to build on European models to create a “positive peace” ecosystem on the Korean Peninsula.

Moon’s speech, delivered at the University of Oslo as a keynote address for the Oslo Forum, underlined his resolve to continue social and economic exchanges with North Korea, coming on the anniversary of the historic first U.S.-North Korea summit in Singapore last year.

Touting the summit as the result of “bold commitment and leadership” of both U.S. President Donald Trump and North Korean leader Kim Jong-un, Moon attributed the current stalemate in negotiations between the two parties as a “process of thawing out” a hostility from the last 70 years.

In an interview following his address, Moon said he was aware of the letter that Trump received from Kim on Tuesday and knew of its contents beforehand. To a question on whether he would hold an inter-Korean summit with Kim before Trump’s scheduled visit to Seoul at the end of this month, Moon said he would find such timing preferable, but that it was ultimately up to Kim to decide.

“What we need now is not a new vision or proclamation, but the deepening of mutual understanding and trust,” Moon said in his speech earlier. “With this as a foundation, we have to strengthen the will for dialogue further.”

Labeling “feelings of mutual hostility” as the greatest cause of conflict, Moon told the audience he seeks to supplant the reality of an enduring and structural division in Korea with a constructive model of peace that he named “peace for the people.”

The president went on to cite European precedents that inspired his model, referring to environmental agreements signed by Nordic countries like the 1985 Helsinki Protocol or the 1972 Oslo Convention that he said served as proof that dialogue could improve the quality of people’s lives.

His model for peace would first address the damaging effects of a hard border in Korea, Moon said, which makes it difficult to deal with issues like wildfires or infectious diseases in domestic animals and threatens the livelihoods of fishermen.

Moon said the example of “permanent legations” set up by East and West Germany through a treaty in 1972 allowed the two countries to respond quickly and jointly to similar contingencies on their territories, and stressed his hope that Korea may follow suit.

The president was referring to a recent series of natural disasters, like wildfires that ranged through the demilitarized zone and the threat of African swine fever coming across the border from the North, which prompted some experts in South Korea to float the long-proposed idea of establishing a joint commission with the North to deal with emergencies. A Blue House official said earlier, however, that Moon would not make such a proposal to Pyongyang in his Oslo speech, since it was “too unilateral.”

Yet the president did take the opportunity to refer to his vision for the development of an inter-Korean -- and Northeast Asian at large -- economic community similar to the European Union, which he first introduced in Berlin in July 2017, shortly after his inauguration, and the idea of a East Asian Railroad Community he proposed in August 2018 as a foundation for this regional body.

Last year, Seoul broke ground on a project to modernize and connect the two Koreas’ railroads and roads after a joint inspection of the North’s rail system last November. But economic sanctions on the North and the collapse of the second North Korea-U.S. summit have since prevented any further progress. The North, meanwhile, continues to slam the South for continuing to stand by Washington’s so-called maximum pressure campaign.

As the city where former South Korean President Kim Dae-jung received the Nobel Peace Prize in 2000 as a result of his “sunshine policy” toward the North, Oslo has been cited by Blue House officials as an ideal place for Moon to renew his call for diplomacy with the North.

Moon arrived in Norway on Wednesday as part of a week-long visit to Northern Europe. From Monday to Tuesday, he was in neighboring Finland, where he received words of support from the country’s leader in his efforts to build peace. The final leg of the president’s trip is Sweden, where he is scheduled to make a similar address to the country’s parliament on denuclearization and peace on the Korean Peninsula.