Trump gets another ‘beautiful’ Kim letter

Trump gets another ‘beautiful’ Kim letter 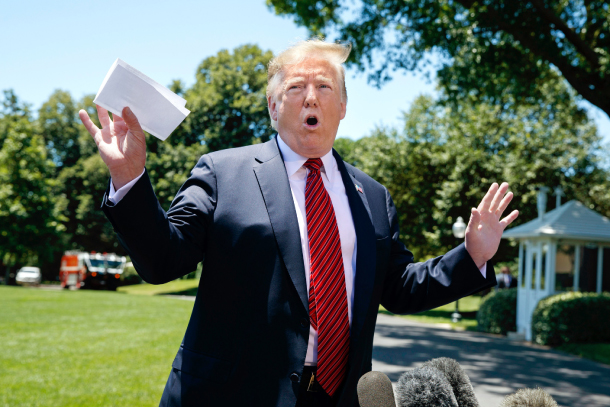 U.S. President Donald Trump said Tuesday that he received another “beautiful letter” from North Korean leader Kim Jong-un and left open the possibility of a third bilateral summit “further down the line.”

Speaking to reporters on the South Lawn of the White House, Trump said he “appreciated” the gesture, adding that it was a “very personal, very warm, very nice letter.”

Trump was asked about the possibility of meeting with Kim while he visits Seoul for a summit with South Korean President Moon Jae-in later this month. That prompted his remarks about the letter.

However, he didn’t elaborate on the contents of the letter.

This was the first time correspondence between Kim and Trump has been described since the second North Korea-U.S. summit collapsed with no deal on Feb. 28 in Hanoi, Vietnam. The remarks also came on the eve of the one year anniversary of Kim and Trump’s historic first summit in Singapore on June 12 last year.

“We have a very good relationship together,” said Trump Tuesday. “Now I can confirm it because of the letter I got yesterday.”

Trump left open the possibility of another summit with Kim, saying, “Well, it could happen, but I want to bring it further down the line.”

He added, “I think that something will happen that’s going to be very positive.”

Trump insisted in the meantime that Kim has “kept his word” despite two short-range missile launches that North Korea conducted in May. He said that there was no nuclear testing and no “long-range missiles going up.”

He continued, “The only thing he sent up were very short-term, short-range,” which is “a whole different deal.” Trump’s aides have insisted May’s launches violated UN Security Council resolutions.

“But he’s kept his word to me; that’s very important,” said Trump. “And again, the letter he sent was a beautiful letter. It was a very warm letter … And I don’t say that out of naivete.”

Such epistolary exchanges between the two leaders have been a major part of the diplomacy between the two countries and helped pave the way to the two Kim-Trump summits.

The last time Trump made public he received a letter from Kim was on Jan. 19, ahead of the Vietnam summit, which had been delivered to the White House in person by Kim Yong-chol, a vice chairman of the North’s ruling Workers’ Party.

Trump also addressed Tuesday a recent report that the North Korean leader’s half brother Kim Jong-nam had been a CIA informant.

“I saw the information about the CIA, with respect to his brother, or half brother,” said Trump. “I would tell him that would not happen under my auspices, that’s for sure.”

Kim Jong-nam, the eldest son of the late North Korean leader Kim Jong-il, was killed in Malaysia on Feb. 13, 2017, after two women smeared his face with components of the deadly nerve agent VX.

The Wall Street Journal reported that Kim had traveled to Malaysia to meet with a CIA contact in February 2017 and had met with intelligence operatives on several occasions. South Korean and U.S. authorities saw North Korea as being behind the assassination, but Pyongyang has denied involvement.

Trump again underscored that he believes North Korea, under Kim’s leadership, has “tremendous potential” because of “what it represents” laying out that “the people are great, the land is great, the location is incredible between Russia, China and South Korea.”

He said that Kim Jong-un “feels that more than anybody,” adding that “he totally gets it.”

John Bolton, Trump’s hard-liner national security adviser, said at a Wall Street Journal forum in Washington earlier Tuesday that it was “entirely possible” that there could be a third North-U.S. summit, stating leader Kim “holds the key.”

Bolton said, “We’re ready when they are” and that “it’s any time that they want to schedule it.”

But he underscored that the United States is continuing its maximum pressure campaign on North Korea because Kim still appears not to have made “a strategic decision to give up the pursuit of deliverable nuclear weapons.”

South Korean experts are cautiously anticipating some traction in the stalled denuclearization talks between Pyongyang and Washington.

Moon Chung-in, the presidential special adviser for unification and national security, said in Seoul Wednesday that Kim’s letter to Trump “could open up new possibilities” between the North and the United States following the “setbacks” since the Hanoi summit.

Moon, also a Yonsei University professor, said in a forum hosted by the Ministry of Foreign Affairs and the Sejong Institute that he believes it is “unrealistic” for the United States to insist on no sanctions relief until North Korea’s complete denuclearization.

He also called for “flexibility” in sanctions measures and proposed employing a “snapback clause” enabling the imposition of stronger sanctions if North Korea does not cooperate in the denuclearization process.

Moon Chung-in said he views President Trump’s approach of positive reinforcement as “more effective than … the crime and punishment approach,” adding when he spoke to high-ranking North Korean officials, “they were also of the same mind.”