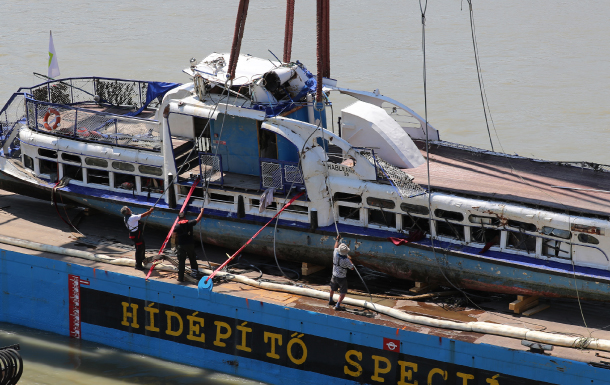 Rescue workers fasten the Hableany wreckage to a barge Tuesday after the boast was salvaged from the Danube River in Budapest. It sank near the Margaret Bridge nearly two weeks ago, killing at least 22 Koreans. [NEWS1]

Korean rescue workers on Wednesday took part in a joint search with Hungarian authorities to find the remaining four missing bodies following the salvaging of the sightseeing boat that capsized on the Danube River in Budapest two weeks ago, killing 22 Koreans.

The continued search took place after a brief misunderstanding where Hungarian authorities initially rejected Korean rescue workers’ request to take part in a joint search Tuesday following the salvaging of the Hableany.

The Korean Ministry of Foreign Affairs on Wednesday morning clarified that this was a misunderstanding because Hungarian authorities believed the Koreans wanted to take part in the police and prosecution’s probe.

Korean rescue workers expressed their wishes Tuesday to conduct an additional “search” to the Hungarian rapid response team, meaning they wanted to continue to “find” missing bodies in the salvaged ship, which is currently stationed at Csepel Port in southern Budapest.

Yet the Hungarian side misunderstood this as indicating that the Koreans wanted to take part in the police and prosecution probe in the accident, and said they will not be able to conduct a joint investigation.

The Hungarian police and prosecutors earlier Tuesday launched a full-scale probe into the sinking of the Hableany and had also been restricting press. The Korean joint rapid response team in Budapest said that they later received a permit from Hungary to enter and search the ship Wednesday after they clarified that they did not want to take part in a joint probe.

The Hableany, carrying 33 Korean tourists and two Hungarian crew members, sank on the evening of May 29 after it was struck by a larger Swiss ship, the Viking Sigyn, helmed by Yuriy C., a 64-year-old Ukrainian captain who has been accused of negligence. Immediately after the sinking, seven survivors were rescued and seven bodies recovered.

The wreckage was completely lifted from the water, drained and placed on a barge Tuesday afternoon, 13 days after the sinking of the ship on the Danube River near Margaret Bridge. The salvage process took nearly seven hours, following some setbacks after the unexpected discovery that the rear of the vessel was damaged, and concluded around 1:30 p.m., local time.

Four bodies were immediately recovered following the lifting of the sunken ship earlier that morning. This included three Koreans, including the missing 6-year-old girl, and the Hungarian captain. The wreckage was transported by the barge to Csepel Port, where it was to be examined by nautical and technical experts, as well as prosecutors.

Song Shun-keun, a defense attache at the Korean Embassy in Hungary, said in a briefing Wednesday in Budapest that Hungarian police have taken over the search from the Hungarian Counter Terrorism Centre.

There could be sand and other obstructions inside the vessel that could impede the search, he added, but left open the possibility that more bodies could be discovered inside the ship.

He indicated that rescue workers had been unable to search thoroughly inside the vessel the previous day.

Helicopter and boat searches will also continue with the cooperation of Hungarian and Korean rescue workers, while sonar equipment will be employed to search the bottom of the river. Another investigation into the Viking Sigyn is also taking place, according to the Korean rapid response team.

Korean authorities have requested a further probe into the captain’s suspected negligence in leaving the sinking Hableany stranded on the day of the accident. The Viking Sigyn returned to Budapest on Monday freshly painted with no signs of the crash. The rapid response team will also be providing legal support and assistance in cremation, funeral procedures and repatriation of bodies and family members.