Despite the slow start, Yang Hyeon-jong of the Kia Tigers is slowly returning to form.

On Sunday, Yang was selected as the KBO’s MVP for the month of May. In the six games he started in, Yang picked up four wins and two losses with a 1.10 ERA. In addition, he also topped the monthly statistics in strikeouts, at 44. 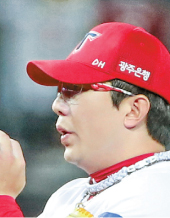 Yang is once again continuing his stride this month as he picked up wins in both of the games he started in with a 2.77 ERA for June. Yang’s strong performance over the past two months is a return to form, picking up six wins and seven losses with a 3.84 ERA.

When Yang started his season in March, he was off to one of the worst starts in his career. In six games throughout March and April, he picked up five loses in six games with an ERA as high as 8.01.

Making matters worse, the Tigers also struggled at the time, dropping to the bottom of the league. As Yang was having such a disappointing start, the Tigers fans started criticizing the coaching staff and former manager Kim Ki-tai for overusing Yang over the last five seasons, as he pitched in more than 170 innings per season.

Yet Yang disagreed with the criticism.

“I’m definitely not overworked,” Yang said. “I also don’t understand how this controversy started at the beginning of the season. As a result [of playing as a starter for 10 years], I think it’s important not to get tired in the summer. I normally don’t have the best statistics in April, but this year was just a little worse.”

In the offseason, Yang spends a lot of time strengthening his shoulder. As he has stable control and posture in his pitch, he doesn’t do a lot of live pitching until spring training to save energy. Using this pattern, Yang has been able to pitch a lot of innings over the last five seasons and quickly became the KBO’s best domestic pitcher. He also hasn’t had many injuries.

But this season was a little different than the others in terms of preparation. Because of personal reasons, Yang joined spring training a week later than the others and his live pitching schedule was delayed. As he wasn’t fully prepared, his shoulder got tense and as a result, his pitches were thrown more toward the center.

“These days, regardless of the speed or type of pitch, batters will just hit all the pitches that are thrown at the center [of the strike zone],” Yang said. “It was my fault for not thinking that and continuing to throw my pitch.”

Despite Yang’s slump at the beginning of the season, he was able to bounce back quickly with a little help from coach Toshio Kanbe. Back in 2008, Yang trained with Kanbe for three years, dividing his pitching form into sections and practiced transferring his weight. He’s practiced at baseball stadiums, on the roof of the hotel and in parking lots, and on days when he’s not throwing, he worked on his pitching form at home.

“Even after I sweated from practicing until the early hours of the morning, I didn’t get compliments from Kanbe,” Yang said.

As an ace pitcher, the fans always have high expectation of Yang. He is expected to consistently pitch more innings throughout the season without giving up many runs. Yet this season, he learned another lesson: that an ace player’s slump can land the entire team in trouble.

“To be honest, I didn’t really consider my struggle at the beginning of the season seriously because I thought I’ll comeback anytime,” Yang said. “I was more surprised to see people getting worried about me. After hearing about the criticism, I told myself that I really have to play well.”

Now that he’s finally back to his old form, Yang said he feels different on the mound.

“After talking with the coaches, I’ve moved my release point forward,” Yang said. “Starting in May, I felt like I was playing against the batters.”