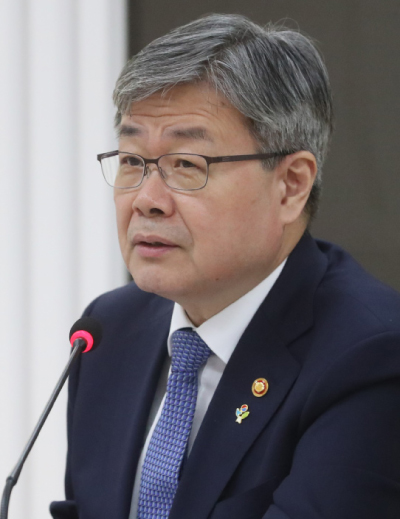 The government plans to submit four fundamental International Labour Organization (ILO) conventions for ratification by the National Assembly as early as September.

While attending the ILO Centenary Conference in Geneva, Minister of Employment and Labor Lee Jae-kap told reporters Thursday that his department will ask the Korean Foreign Ministry to draw up a ratification agreement for lawmakers in July.

Government departments will discuss the four conventions and canvass the opinions of labor organizations this month.

The ratification agreement will go to the National Assembly after President Moon Jae-in approves it at a cabinet meeting.

“It usually takes three months to come up with a ratification agreement,” Lee said. “We will try to get it ready by September for the National Assembly’s regular session.”

He said even if the government fails to prepare the ratification proposal by September, they will get it done by November in consideration of the annual National Assembly audit and the time needed to review the legislation.

Last month, the employment and labor minister said Korea was willing to ratify at least three of the four ILO conventions amid growing pressure from the European Union.

Last month, Minister Lee said the government was postponing the ratification of the abolition of forced labor because a more thorough review of Korea’s own laws on the issue was needed.

In Geneva, however, Lee indicated that all four conventions would be ratified, even if it means a reform of existing Korean laws.

Despite joining the ILO in 1991, Korea deferred four of the organization’s eight fundamental labor conventions.

The European Union (EU) has pressured it to adopt the standards as part of its free trade agreement.

Lee said while there are no regulations in the free trade agreement that allow the Europeans to impose trade restrictions if Korea failed to ratify the ILO conventions, the pressure was growing.

“While there will be no trade restrictions, we have to be prepared for the possibilities of other pressures,” Lee said.

While Korean labor unions have demanded that all four conventions be adopted, companies have argued that the government should allow companies to hire replacement workers when its employees go on strike and prohibit unions from occupying their places of business during strikes.

In Korea, striking workers have stormed into offices including those of chief executives. GM Korea workers took over the office of the automaker’s chief executive, Kaher Kazem, in April 2018.