Who will lift the World Cup?

Who will lift the World Cup? 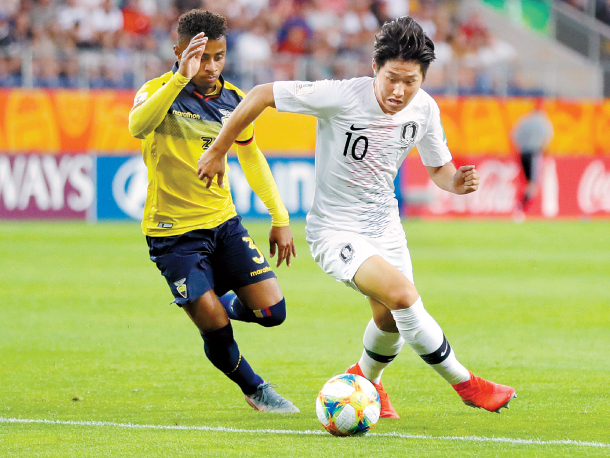 Lee Kang-in, right, dribbles the ball during a semifinals match against Ecuador at the FIFA U-20 World Cup at Lublin Stadium in Lublin, Poland, on Tuesday. [AP/YONHAP]

Korea’s U-20 football team has finally arrived in Lodz, Poland, ahead of its last match of the U-20 FIFA World Cup on Saturday.

Having played six matches in less than three weeks, the young Korean team now has just one more game to win before it becomes the first Korean men’s team to ever lift a FIFA World Cup trophy. Before it can reach that milestone, the U-20 team has to get past Ukraine, a team that has torn through the tournament without a single loss - so far.

Head coach Chung Jung-yong has repeatedly stressed that the final match will come down the players’ mentality. Physically, Chung has no doubt that the team has what it takes, but after three intensive weeks, it’s a mental game.

If the U-20 team can win the final, it will join the 2010 women’s U-17 squad as the only Koreans to ever lift a FIFA World Cup trophy. 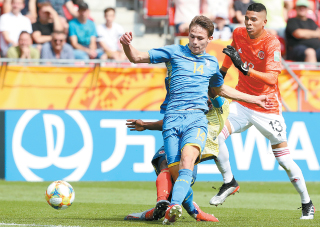 Ukraine’s Danylo Sikan, left, scores a goal during a quarterfinal match against Colombia at the FIFA U-20 World Cup in Lodz, Poland, on June 7. [AP/YONHAP]

In pursuit of that goal, Korea’s U-20 team will once again be led by Valencia’s young prospect: Lee Kang-in. Lee has only scored one goal throughout the tournament, but has proven his importance in every game with four assists. Korea’s advancement to the final has made Lee a likely candidate for the Golden Ball award.

As Lee has proven to be crucial for Korea, his recovery is going to be an important determinant in the final match. Throughout the tournament, Lee hasn’t been given a break, playing in all six matches.

Along with Lee Kang-in, Korea has also seen an impressive performance from goalkeeper Lee Gwang-yeon. Goalkeepers don’t normally receive much attention, but Lee Gwang-yeon has made several superb saves to help Korea advance this far.

Looking at the two U-20 teams’ all-time head-to-head record, Ukraine is slightly ahead with a win. The teams have only played each other once, while training in Spain back in March. Ukraine scored the only goal of the match in the fifth minute and won 1-0. Yet the final match on Saturday is expected to be a different story as the U-20 team didn’t have its full starting lineup, like Lee Kang-in.

But Korea isn’t the only country looking to make history in Lodz.

This is the first time that Ukraine has ever advanced to the final - its previous best saw it reach the round of 16. Despite its unimpressive all-time record at the FIFA U-20 World Cup, this year, Ukraine was a force to be reckoned with.

It first started the tournament by topping Group D with two wins and a draw at seven points. In the round of 16, Ukraine picked up a big 4-1 win against Panama and defeated Colombia 1-0 in the quarterfinals. Then, in the semifinals, it defeated Italy 1-0.

Ukraine remains undefeated at the tournament at five wins and a draw.

Throughout the tournament, Ukraine only conceded three goals while scoring 10. Interestingly, the 10 goals have been fairly evenly shared among three players. Of the three, Danylo Sikan is the leading scorer of the team with four goals. Sikan, who played in five matches, is good enough to be ranked second in goals scored at the 2019 FIFA U-20 World Cup.

Just like Korea’s goalkeeper, Ukraine also has a strong presence in front of the net in Andriy Lunin. He has been Ukraine’s starting goalkeeper in five of the six matches and only allowed three goals, playing a big part in helping Ukraine’s undefeated record.

Denys Popov has been another star player for Ukraine this tournament - he has scored three goals so far, despite being a defender - but will miss out on the final because of accumulated yellow cards.

For both teams, a win will be a historic achievement. Interestingly, since 2007, the FIFA U-20 World Cup has seen a different country take the title at each tournament.

The final match will kick off at Lodz Stadium tomorrow at 6 p.m. in Poland, or 1 a.m. on Sunday morning in Korea.