Lee, the widow of late Hanjin Group Chairman Cho Yang-ho, received a six-month suspended sentence with one year of probation. She also received a fine of 7 million won ($5,919) and has to pay 37 million won in unpaid taxes. 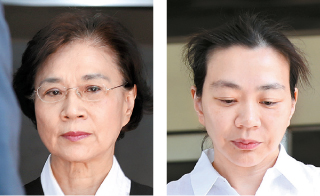 Her daughter Cho Hyun-ah received an eight-month suspended sentence with two years of probation. She received a fine of 4.8 million won and a forfeit of 63 million won in unpaid taxes.

The court also ordered both to participate in 80 hours of community service.

In the ruling, Judge Oh Chang-hoon said that the duo’s wrongdoings cannot be treated lightly considering the scale of their smuggling and the fact that the two took advantage of Korean Air employees and planes even when they held no title in the company.

Oh also added that it is disadvantageous for Cho Hyun-ah that her crime took place during her probation period following the nut rage scandal that broke as she forced a taxiing plane to return to its gate in New York in 2014.

“However, despite Cho’s 203 incidents of smuggling, the total value of goods smuggled each time was mostly under 500,000 won,” Oh said. “And the purpose of smuggling was not for retail, but rather for their own use.”

Oh said he also took into account that the accused regret their actions.

Lee was accused of smuggling fruit, pottery and decorative accessories worth some 37 million won in 46 trips from May 2013 through March last year on Korean Air planes, while Cho was accused of smuggling luxury goods worth some 89 million won from January 2012 through May last year in 203 incidents, also using Korean Air planes.

As the two will not serve prison sentences, industry insiders suspect they might return to management at Hanjin affiliates soon, like younger sister Cho Hyun-min, who made a controversial comeback on Monday.

Cho Hyun-ah attempted to make a comeback in March last year, though it ended about two weeks later when her younger sister Cho Hyun-min made headlines with her own scandal by throwing fruit juice at employees in a fit of rage. Their father Cho Yang-ho made both daughters step down from all positions at Hanjin Group in April last year.

The remaining members of the owner family including current Hanjin Group Chairman Cho Won-tae, Lee and her two daughters are striving to find a way to pay a hefty inheritance tax bill while keeping stable control over the group.

Activist fund Korea Corporate Governance Improvement, currently the second-largest shareholder of the group’s holding unit Hanjin Kal, has been aggressively increasing its shares in the company to have a stronger say over corporate management. Local securities firm Yuanta Securities projected in a report Tuesday that the fund is likely to soon expand its shares in the holding company to 20 percent from its current 15.98 percent.