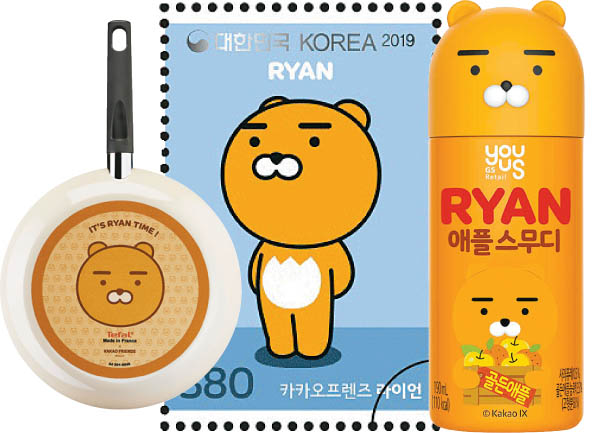 A variety of products, including stamps, beverages and frying pans, incorporate the Kakao Friend’s character Ryan in their design. [JOONGANG ILBO]

His day starts with a cup of Ediya coffee or Maxim ice coffee. After enjoying the coffee at a leisurely pace, he fries an egg with a Tefal non-stick pan for a simple breakfast in the kitchen.

Today is a day for travel.

Ryan reserves a ticket on Jin Air so he can play golf. The sun will be strong, so he puts Face Shop’s sun care product, along with Castelbajac golf wear, in his bag. After leaving the house and going to the airport, he is thirsty. He buys a You Us apple smoothie at the GS25 convenience store. The low-cost carrier does not offer meal, so he needs to buy a Ryan box lunch at 7-Eleven to eat before the flight.

Your day can go like this when you use products connected to Ryan, Korea’s favorite maneless lion.

Ryan is often called Ra Sangmu, vice president in Korean, since his popularity has led to a boom in Kakao characters.

He is a big part of the company’s advertising model, along with the other Kakao Friends, and is popular across a wide range of products, including foods, beauty products, fashion, furniture, kitchen appliances and stamps.

According to Kakao IX, which manages the intellectual property right business for Kakao Friends, Ryan has served as a face model for around 70 affiliated products since 2015.

So, Ra Sangmu is much busier than Son Heung-min, the face of 12 brands.

On many occasions, Ryan is used to target kidults and millennials.

“In order to capture the hearts of the millennial generation, or the 24 to 39-year-olds known as kidults, we released a product which incorporated Kakao Friend’s Ryan and Apeach,” kitchen utensil brand Tefal announced Tuesday.

In May, 7-Eleven partnered with Kakao IX for a Ryan and Apeach picnic lunchbox.

The affordable cost is what makes character models like Ryan popular. While the exact commission can depend upon the number of products sold and the duration of character usage, character models are far cheaper than human stars.

It is also impossible for the character to make a mistake or be involved in a scandal, so there is less risk in using their image.

“When it comes to foods and beverages, partnering with popular characters is more cost effective,” said GS25’s merchandiser for the food and beverage team.

“Companies prefer character models due to their unchanging friendly image and verified awareness, not to mention the low risk of them damaging their reputation.”