‘Cinderella’ from Monaco adds a modern touch to a classic tale

‘Cinderella’ from Monaco adds a modern touch to a classic tale 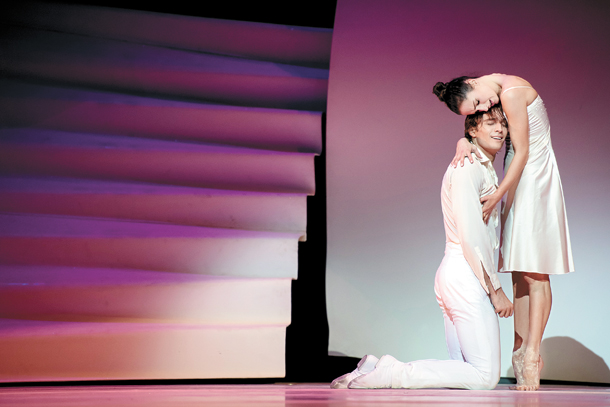 Les Ballets de Monte Carlo’s “Cinderella” is being staged at the Seoul Arts Center in southern Seoul for the first time in 14 years. Instead of glass slippers, Cinderella performs barefoot. [MAST MEDIA]


It’s the same Cinderella. But there are no glass slippers or a pumpkin that turns into a glittering carriage. Performed on Wednesday at the Seoul Arts Center in southern Seoul, Monaco’s Les Ballets de Monte Carlo’s “Cinderella” sounds like it’s a grand classical ballet presented by the royal ballet company, but it’s in fact more contemporary than classical ballet, as the French choreographer Jean-Christophe Maillot adds his own personal touches to the traditional story from beginning to end.

The performance opens with a pas de deux - ballet speak for a dance duet - as Cinderella remembers how happy her parents were before her mother died. Maillot focuses the story on two couples, Cinderella and the Prince, and Cinderella’s mother, who dies but comes back to watch over her daughter as the Fairy, and Cinderella’s father. Korean ballerino An Jae-yong, a principal dancer at the Les Ballets de Monte Carlo, performed the role of Cinderella’s father on Wednesday evening. Throughout the show, Cinderella remains a barefoot heroine covered only in gold glitter. She also dances through the ball in a plain white silk dress with no sparkly ornaments. But the minimal staging and costumes do not minimize the dreamlike moment when she meets the Prince and falls in love at first sight. The two beautifully dance their pas de deux, and it’s probably the most captivating moment of the show.

There are some awkward moments in the performance that may raise some eyebrows in the auditorium - both from the classical ballet and contemporary dance fans - like when the Stepmother dances, or rather pantomimes, and makes strange poses to express her anger.

Indeed, Maillot, who’s been directing and choreographing dozens of works for the Les Ballets de Monte Carlo, is known to be neither classical nor contemporary, and nothing between the two. The company describes him as a choreographer and a director who “refuses to adhere to one style and designs dance like a dialogue where tradition on pointes and the avant-garde are no longer mutually exclusive.”

Although Les Ballets de Monte Carlo’s “Cinderella” is nothing like the Disney production of the fairy tale “Cinderella,” Maillot kept the ending intact, allowing glittering Cinderella to reunite with her Prince Charming to live happily ever after.

Les Ballets de Monte Carlo’s “Cinderella” premiered in Korea in 2005 and this is the company’s second visit with the piece in 14 years. The three-day production has its final performance today.