‘The driving force to amend the Constitution has disappeared’

‘The driving force to amend the Constitution has disappeared’ 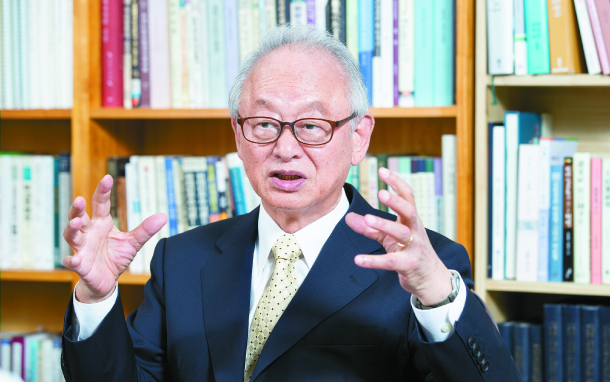 Lee Bu-young, 77, the chairman of the organizing committee for the International Conference for Peace in East Asia and an independence movement activist, offers insightful analysis of the current administration and its relationship with the North. He says that the power is concentrated too much on the president and the cabinet is almost like a shadow.

He warned that if this continues, the Moon administration will see frustrating results in the end. Therefore, he said that amending the Constitution to change this is necessary. He said that this “imperial” presidential system must by ended by decentralizing and giving power to the prime minister. On the topic of North Korea, he argued that excessive ideological violence is not the answer to reducing the emotional gap with North Korea.

Lee is currently in charge of a business that commemorates Lyuh Woon-hyung, an independence movement activist. He is also the chairman of the organizing committee for the 2015 International Conference for Peace in East Asia and board president of a foundation that promotes freedom of speech.

A former Uri Party chair, he retired from politics four years ago, but he is still busy. Last year, he made a tour of the country from March for nine months to pay tribute to ancestors who fought for Korean independence and to listen to the people.

“I was not aware of how many traces of righteous people there were in our territory. The government is not able to do everything alone. However, at least, I thought that the government should take action, make an apology and resolve important matters, including incidents that happened in the Japanese colonial era, and before and after the Korean War,” said Lee. “I thought that was the start. Any place I go, there are many who do not even talk to each other even though they are in the same neighborhood. This resentment should be resolved.”

Last year, Lee was in the spotlight because of the movie “1987: When The Day Comes.” He played a pivotal role in starting the June Democracy Movement, a nationwide democracy movement in Korea that generated mass protests by disclosing the torture of student Park Jong-chul, who died while he was in prison.

“When I went to Yeongdeungpo Prison in 1987, the security chief and the prison officer who were close to me were there. One day, the security chief called me intentionally and said, ‘We are in trouble. If this goes on, our country will be destroyed.’ [I asked,] ‘What do you mean?’ [He responded,] ‘If they killed someone, they should let the public know and be done with it, but they keep distorting and manipulating the truth. Real criminals exist, but they say they can’t [let the public know] and that only [those] people deserve this. If these things keep happening, who would believe us?’ He was shivering with anger, saying that he could not put up with this. He said that there were three more people who were the real criminals.”

The following is an edited excerpt from an interview with Lee.

Q. You are the hero of the June Democracy Movement, but you think the result was not satisfactory.

A. Among people who participated in the movement, they say that even though they worked hard, other parties took all the credit. Not only during the period of Seoul Spring when democratization was spreading, but also after the June Democracy Movement in 1987. The two Kims — Kim Young-sam and Kim Dae-jung — merely thought that the chance came to them and were not prepared to lead the country. They only thought about how to take the achievement of democratization and talked about whether they could unify or not. The people achieved democratization through death, but nothing was really changed. Things that changed were that the president should be directly elected and the term should be five years. Then, the Constitution in 1987 appeared.

People who were jailed must have been disappointed.

That year on July, me and Kim Geun-tae, the former chair of the Uri Party, were not released from prison. Only those who agreed with the two Kims were released. If a presidential election is held in that state, the result is obvious. Young people punched walls until they broke their hands.

They cried and refused to eat. As I was released [from prison,] I saw students and laborers burning themselves to death. On the grounds that I did not engage in the rivalry between the two Kims, people had me organize a funeral for [protesters who committed self-immolation] in April 1988. And at the funeral, the two Kims came to me to run a general election campaign.

I said, “How could you come here? Because you two were divided, people in the democratization movement were frustrated and died like this.” If the two Kims were separated as the president of the party and the president of the nation respectively, many problems could have been solved under the name of democratic forces.

What do you think about the constitutional amendment toward a new system?

Of course we need to change. As I have said before, the system of 1987 only changed the election system to vote for the president directly. The October Restoration by President Park Chung Hee was all about the imperial presidential system, so it kept on failing.

This is similar to when Park Chung Hee or Chun Doo Hwan ruled. The cabinet is almost invisible, only looking after the president and the prime minister. I believe that this is being repeated in the Moon Jae-in administration as well. The reason why past presidents became lame ducks and were demolished was because the power was skewed to one side. By decentralizing and sharing power to the National Assembly, the voice of the people should be reflected in the politics.

The driving force to amend the constitution has disappeared. Successive administrations at first say that they will amend the Constitution, but afterward they oppose it.

Moon Jae-in also joined the trend. President Moon talked about terms for four years, but it failed because successive presidents had too much power. Not only for himself, but also to prevent the misfortune of the next presidents, the government should amend the Constitution.

Almost like the bicameral system, everything should be assumed by the prime minister. If that is impossible, the prime minister should have the right to reform the cabinet, and the Blue House should not interfere in this. The senior presidential secretaries are secretaries. Why would you make it so that they don’t even know who the ministers are? On top of that, ministers cannot change personnel in each department, so even high-ranking officials are just looking at the Blue House waiting for orders.

How can ministers work in this situation? If it is like this, the Moon Jae-in administration will fail. It will become as miserable as the previous administration. After the general election next year, it will become a lame duck. Before that, achievements such as amending the Constitution and revising the election law should all be made.

You kept on dealing with the problem of the National Intelligence Service, and you became an object of hatred. It must have been hard.

The most regrettable thing from my political career is failing to revise the National Security Act. In 2005, when I was the chair of the Uri Party, I agreed with the head of Grand National Party Park Geun-hye to delete poisonous clauses only. The Grand National Party approved this.

Yet, the ruling Uri Party opposed this. As a result, we did not revise the act at all, and we became a pro-North Korea party who tried to abolish the act.

The party was divided into half as well. It is impossible to get everything at once. With excessive ideological violence, the relationship between the South and North cannot get better.