Moon still pushing for a summit

Moon still pushing for a summit 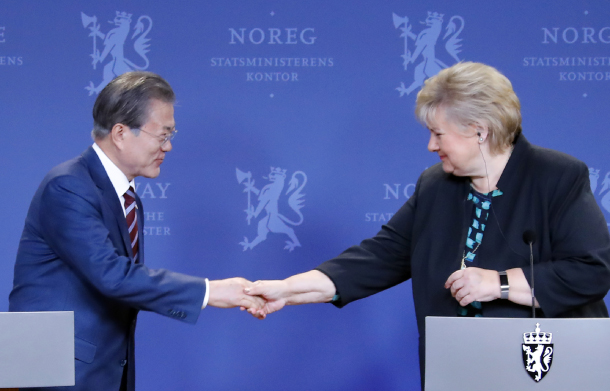 “I cannot say for sure if an inter-Korean summit is possible in June or not,” Moon said during a joint press conference on Thursday after a summit with Prime Minister Erna Solberg of Norway.

“But the two Koreas have experience of arranging a summit in a short period of time, so it is not physically impossible.”

Moon and Solberg had a meeting at the Norwegian prime minister’s residence in Oslo, as part of Moon’s three-day state visit.

“My answer yesterday was that I am always ready to meet him, and the timing depends on Chairman Kim,” Moon said.

At an Oslo forum on Wednesday, Moon had said it is necessary for the leaders of the two Koreas to meet before Trump’s upcoming visit to Korea.

According to the U.S. State Department, Trump is scheduled to visit Korea after attending the Group of 20 Summit in Japan on June 28-29.

“As I have already said yesterday, I am ready to talk to him at any time, any place, regardless of the format,” Moon said. “And I am saying again that it is up to Kim to choose the time [to meet in the coming weeks].”

“But I cannot say more than what he made public,” Moon said.

Since the second Kim-Trump summit collapsed with no deal in February in Hanoi, Vietnam, Moon has been trying to restart the stalled dialogue. The letter was the first correspondence between the American and North Korean leaders since then.

During the summit, Moon and his Norwegian counterpart discussed a wide range of bilateral issues, as well as Moon’s vision of a peaceful, nuclear-free Korean Peninsula.

“Today, Prime Minister Solberg showed firm support for our government’s efforts for complete denuclearization of the Korean Peninsula and the permanent establishment of peace. I express my special appreciation,” Moon said.

Norway has maintained diplomatic relations with North Korea since 1973, and the Norwegian Ambassador to Seoul is accredited to North Korea as well.

During the summit, Moon and Solberg agreed to build a substantive, future-oriented partnership to ready their countries for the era of the fourth industrial revolution. “We discussed specific plans to elevate the bilateral relations to the next level,” Moon said.

Noting that both Korea and Norway have world-class shipbuilding industries, Moon said the two countries agreed to combine their strengths and cooperate to develop environmentally friendly ships with autonomous navigation systems.

The two countries also agreed to develop technologies to produce, utilize and store hydrogen, a next-generation, pollution-free energy source, according to Moon.

To this end, Korea and Norway will build a new joint commission on science and technology to share policies and expand exchanges of researchers.

The two leaders also agreed to broaden bilateral cooperation beyond the traditional sectors of shipbuilding and Arctic research.

They agreed to expand cooperation in science and technology, defense and air quality research, the Blue House said.

Moon and Solberg celebrated the rapid increase of bilateral trade since a free trade agreement took effect between Korea and the European Free Trade Association (EFTA) in 2006, according to the Blue House. The EFTA is formed by four non-EU states: Norway, Switzerland, Iceland and Liechtenstein.

They agreed to exchange information about welfare policies. A social security agreement for Koreans and Norwegians working in each other’s country was also signed after the summit.

The two countries signed Thursday a total of 16 agreements, including the social security accord, and seven memoranda of understanding on shipbuilding and maritime industry cooperation.

This year marks the 60th anniversary of diplomatic relations between Korea and Norway. Moon is the first Korean president to make a state visit to Norway. At the press conference, Moon said the two countries’ friendship dates back to the 1950-53 Korean War. Norway dispatched a 623-member medical team to Korea and operated a field hospital, and more than 90,000 soldiers and civilians were treated by them.

After the summit, Moon was scheduled to visit Bergen, Norway’s second-largest city, to inspect a 26,000-ton logistics and support ship for the Norwegian Navy, built by South Korea’s Daewoo Shipbuilding & Marine Engineering.

He will then fly to Sweden, the last leg of his eight-day tour of Northern Europe.