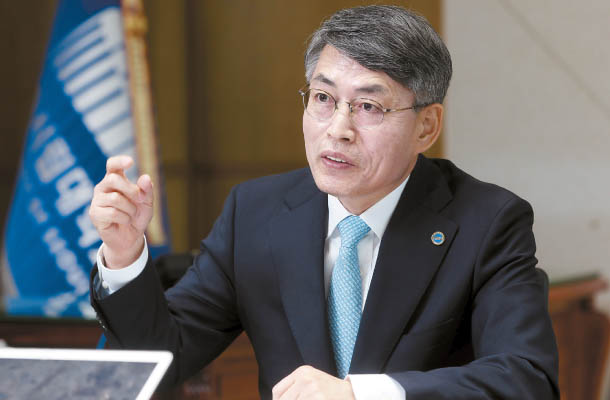 Suh Soon-tak, president of the University of Seoul (UOS), during an interview with the JoongAng Ilbo this month at his office in Dongdaemun District, central Seoul. [KANG JUNG-HYUN]

Suh Soon-tak, the president of the University of Seoul (UOS), thinks the school needs to approach big data in a comprehensive way.

Suh said he was inspired by the book “Scale” by the British theoretical physicist Geoffrey West.

He thought West’s attempt to analyze the human ecosystem in cities and companies through data was unique, so he sent an email to West and set up plans to meet him during the summer.

UOS celebrated the 100th anniversary of its foundation last year. Suh plans on creating a foundation for the school in the following years by establishing research centers as well as overseas satellite campuses.

Suh received his bachelor’s and master’s degree in public administration at UOS and received his doctorate in town planning at Newcastle University in the United Kingdom in 1998. He worked as a research fellow for the Korea Research Institute for Human Settlements for 13 years and taught at UOS as a professor of urban administration since 2001. As a leading scholar of urban planning, Suh has contributed to various government and civic groups. He was elected president of UOS in March.

The JoongAng Ilbo sat down with Suh in his office at UOS in Dongdaemun District, central Seoul, earlier this month to talk about why the university will be focusing on big data.

Q. It has been over 100 days since you took office as the president of UOS.

A. It was a busy period. This year is the 101st anniversary of the university, so I thought I should create a foundation for the following century. We have to strengthen our research capacity in order to lead the fourth industrial revolution, and this can be accomplished through the creation of a big data research center, which was mentioned in my inauguration speech.

Why do you focus on big data?

With society becoming more diversified, many values are conflicting with each other. Fortunately, the various preferences of people and their actions can be stored in data. Knowledge about big data and its analysis is essential in order to understand humans and their societies and find a solution to their problems. Universities need to be able to process big data and analyze it for the future of Korea. In addition, students should be educated on the subject based on the school’s research capabilities.

What are UOS’s strengths on big data?

Our school is a public university funded by the Seoul city government. We can access Seoul’s vast amount of data more easily than any other university. We can provide analysis on things that can improve people’s lives like healthcare, the environment and traffic, and also contribute to making policies. In addition, the university has around 40 to 50 professionals on subjects related to big data and equipment like supercomputers. We are also planning on inviting professionals from abroad.

How will you educate students on big data?

We don’t need everyone to become big data specialists. However, whatever your field is, if you don’t want to fall back, one has to be able to follow the changes in technology. In that perspective, students who come to our school will need to learn the basics of [big data] where they would understand data and know how to write simple computer code.

What kind of talents do you think are important to foster?

You also talked about a plan to establish satellite campuses overseas in your inauguration speech.

The world’s population is increasing, but the populations of Korea and advanced countries are decreasing. Most developing countries’ populations are increasing and the population is rapidly heading to the cities. Korea has experienced rapid urbanization and dealt with it effectively. With that experience in mind, I thought that there would be a lot of demand if [UOS] had a campus overseas [in one of the over-populated cities]. After conducting research on several countries, we decided to first create a campus around Ulaanbaatar, Mongolia. We also have our eyes on [building another campus in] Vietnam.

Why Mongolia? What kinds of effects do you expect from opening a campus there?

Mongolia is very positive towards the idea of having a global campus and is even offering a site [for its construction]. In addition, as [Mongolian cities] became more developed, [Mongolia] has shown interest in things like our information and communications technology, urban development and traffic. UOS plans to admit local students and educate them for three years in Mongolia and then a year in Korea. For UOS, it is a chance to increase international recognition and for the Seoul city government, it will help create relationships between cities. It will also help us export policies or companies enter the market [overseas].

Do you have a solution for the unemployment crisis in Korea?

No university is free from the unemployment crisis for students. Our university had an employment rate of 64.2 percent in 2018, coming in 12th place among universities in Seoul. However, we were in fifth place for the yearlong employment maintenance rate with 90.5 percent, which reflects the quality of the jobs. We have a center that supports students by helping them search for careers and jobs, as the trends in the job market are ever-changing. We have also been supporting students to create their own start-ups since last year by creating a center for start-ups. Recently, in collaboration with the Seoul city government, we created an “on-site campus” [in central Seoul] for students to carry out start-up programs at Sewoon Electronics Plaza in Jongno District and Wonhyo Electronics Market in Yongsan District, which are places suffering from recession.

What do you want to achieve as the president of UOS?

First, an important goal is to successfully create a big data research center and a campus overseas. The university is in a crisis, as the number of students has decreased. The only way for universities to survive is to be specialized in one area. Our university needs to play to its strengths as a school that specializes in urban science. Although our university is small, we will prepare for the uncertain future by focusing on the fact that we are located in Seoul and our strengths are in urban science.