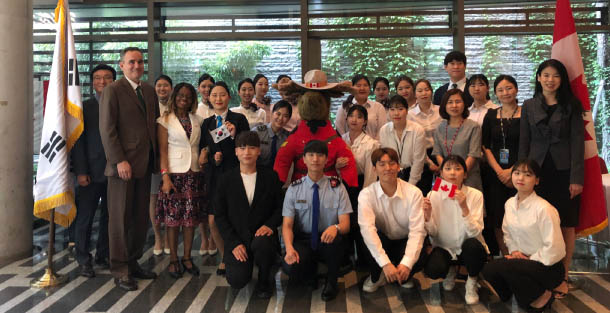 Students of Korea Tourism College visit the Canadian Embassy in central Seoul on Thursday to hear from the ambassador, his wife and the staff members at the embassy about diplomatic protocol practices and educational and training opportunities in Canada and the agricultural products of the country. [ESTHER CHUNG]

Food and diplomacy have much in common, said members of the Canadian Embassy in Seoul as they met with dozens of students studying catering and hotel management at Korea Tourism College (KTC) at the embassy in central Seoul on Thursday.

“As someone who has been working in the protocol office for more than 10 years at the embassy, I can tell you that the smallest mistakes made in a protocol procedure can become a diplomatic debacle,” said Ryu Kyung-hwa, protocol assistant to the ambassador at the Canadian Embassy in a lecture to the students of KTC.

“And protocol involves how food and menus are prepared during diplomatic visits,” she said. “Just with one dish you can make a guest feel welcomed and at home, or send a strong political message. There is even a book written about how much food and diplomacy can be interlinked - have you heard about the book ‘Dinner with Churchill’?”

Ryu was speaking to some 20 students from KTC, a college in Icheon, Gyeonggi, during their visit to the embassy on Thursday to hear about Canada’s culture, educational and training opportunities and agricultural products.

“Overseas students are granted opportunities to apply for part-time jobs while they are studying in Canada,” said Kim Soo-hyang, a trade commissioner at the embassy.

Kim introduced the students to programs such as co-ops, an internship program that overseas students with study permits can apply to or the Post-Graduation Work Permit Program (PGWPP) that grants graduates of some universities and colleges in Canada a period of stay in the country to find jobs after graduation.

There are an estimated 16,825 Korean students studying in Canada as of 2017, according to the Canadian government, the third-most out of all countries, following China and India.

“Canada is a popular destination for international students,” Kim said. “It was the first country to make multiculturalism its official policy.”

The students were also briefed on Canada’s top agricultural products, including wheat, oats, maple syrup - Canada produces some 80 percent of the world’s maple syrup - lowbush blueberries, canola oil, as well as the various wineries in Canada.

“Given the fact that we need to cater to customers of various backgrounds and cultures, learning about different country’s cultures and expectations help us a lot in preparing for our career,” said Kim Bom, a second-year student at KTC studying tourism management.

“This was the first time that a group of students of KTC were briefed about a country at an embassy and we are thankful for the opportunity.”

“Canada’s policies on multiculturalism and its protection of LGBTQ rights make it an attractive country for international students considering different destinations for their studies,” said Jeon Ye-lim, second-year student of hotel cuisine studies at the university. “I am hoping to study or work in Canada in the future.”

Ambassador of Canada to Korea Micheal Danagher gave a lecture about the country and its relations with Korea at the university in May.

“During our visit to the university we were deeply touched by how the students presented themselves,” said Stephanie Danagher, wife of the ambassador, who also has years of experience as a food service professional and in administrative support positions in Canada and in Canadian diplomatic missions. “I am very proud of each one of the students here today and am sure they will be doing amazing things in their future.”