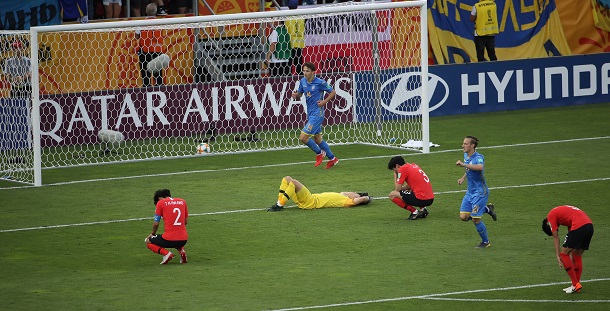 Korea’s U-20 team fell at the final hurdle, missing out on World Cup glory after losing to Ukraine 3-1 in the final of the 2019 FIFA U-20 World Cup at Lodz Stadium in Poland.

Korea started off strong, with Lee Kang-in scoring a penalty in the fifth minute of the game to put the score at 1-0. Just a few minutes later Ukraine had an opportunity with a direct free kick in the 11th minute, but failed to seriously trouble the Korean goalkeeper.

Korea’s second serious opportunity came in the 29th minute with a free kick just outside the box, but the young Taeguk Warriors weren’t able to make anything of it. Ukraine returned fire in the 33rd minute, with Vladyslav Supriaha scoring after Kim Hyun-woo was booked for a tackle from behind to put the score at 1-1 as the first half neared an end.

Although the first half ended at 1-1, Ukraine still dominated in terms of possession, controlling the ball for 65 percent of the half.

Ukraine got off to a quick start in the second half, with Supriaha scoring his second goal in the seventh minute to take the lead 2-1. Korea’s defense struggled to deal with a quick counterattack from the Ukrainian side, who found themselves in the box with very few players to get past, comfortably slotting the ball past the goalkeeper to take the lead.

Korea had a chance in the 24th minute of the second half, with a corner from Lee Kang-in headed toward the goal but cleared off the line at the last minute. Korea won a second corner but again failed to convert.

Struggling to convert ended up being a recurring theme in the second half, with a scrappy but visibly tired Korean team repeatedly taking control in the midfield, sending the ball forward and failing to find a way through in front of goal.

Despite persistent attacks, Korea wasn’t able to find a way past the strong Ukrainian defense. A quick counterattack in the 43rd minute of the second half saw Heorhiy Tsitaishvili score Ukraine’s third goal, the final nail in the coffin for Korea’s world cup dreams.

Korea reached the knockout stage of the competition after coming second in Group F with two wins and one loss. The team got off to a slow start, losing its first game to Portugal 1-0, but bounced back with a 1-0 win over South Africa in game two and a shock 2-1 victory over tournament favorites Argentina in the final match of the group stage.

Korea continued its momentum into the knockout stage, sending local rivals Japan home with a 1-0 win in the Round of 16 before edging past a strong Senegal in a 3-3 that the young Taeguk Warriors ultimately won on penalties.

A semifinal match against Ecuador saw Korea record its fourth 1-0 victory to earn a spot in the 2019 FIFA U-20 World Cup final.

Ukraine tore through the competition to earn its spot in the final, drawing just one game — against Nigeria in the final Group D match — and comfortably knocking down the United States, Qatar, Panama, Colombia and Italy to reach the last two.

Despite missing out on the title, the U-20 team still got further in the contest than any Korean men’s team has ever managed, beating the 1983 U-20 team and the 2002 men’s squad, both of which finished fourth. The U-17 women’s team that took home the trophy at the 2010 FIFA U-17 Women’s World Cup remains the only Korean team to ever win a world cup.