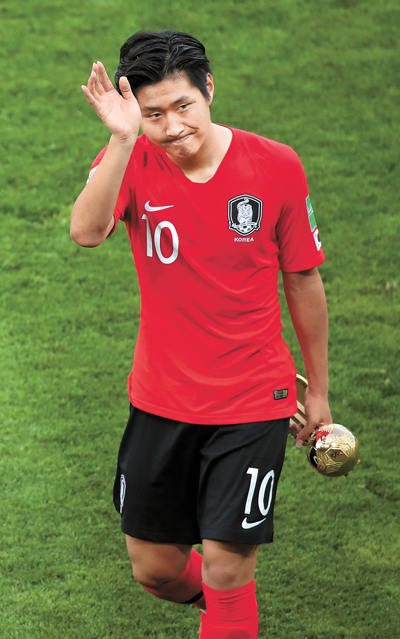 Lee Kang-in waves to fans after winning the Golden Ball Award at the FIFA U-20 World Cup at Lodz Stadium in Lodz, Poland, on Saturday. [YONHAP]

“This is an award for the entire team,” Lee said to Yonhap. “We all played as one on the field. I didn’t think winning the Golden Ball would be that important to me. Our goal was to win the championship, and it’s a shame we came up short. But I played as hard as I could, and I have no regrets.”

Lee became Korea’s first male football player to win such an award. Before Lee, Hong Myung-bo was the only male player to have gotten close to receiving a similar award. He won the Bronze Ball, awarded to the player who finishes third in MVP voting, during the 2002 FIFA World Cup.

Lee also became only the second Asian player in the history of the FIFA U-20 World Cup to win the award. Ismail Matar of the United Arab Emirates was the first Asian player to win the Golden Ball in 2003.

Lee’s win was even more impressive because the Golden Ball has traditionally been awarded to the best player from the winning team of the tournament. Some notable winners of the Golden Ball include Diego Maradona and Lionel Messi of Argentina and Paul Pogba of France.

“This has been a great tournament,” Lee said to Yonhap. “I am grateful for everything that’s happened since Day 1. I want to thank my teammates for being part of this. I knew they were exhausted today, but they never showed it.”

Only 18, there is a possibility that Lee could play in another U-20 World Cup, as it is a biennial tournament. But Lee says he isn’t thinking that far out into the future.

“I am too tired now to think about that,” Lee was quoted as saying.

Lee made his first public appearance during the third season of the KBS TV program “Shooting Kid” in 2007. The gifted youngster was only seven at the time and was labeled a football prodigy. Hailing from Incheon, Lee entered the youth academy at Incheon United before moving to Spain in 2011 with his family, where he was accepted into Valencia’s youth academy.

Lee has moved up the ranks at Valencia very quickly. In July 2017, Lee was promoted to the Juvenile A team and then in January, he was offered a professional contract and promoted to the Valencia B team.

During the 2017-18 season, the attacking-midfielder played 11 matches in Spain’s Segunda Division B league and scored one goal. But that was only the beginning. Last July, prior to the beginning of this season, the club announced the renewal of Lee’s contract.

Lee signed a four-year contract with a termination clause of 80 million euros ($90 million). Lee’s buyout was the second-highest among Valencia’s U-19 players.

After completing Valencia first team preseason training camp, Lee was promptly called up to the top team and made his debut for the club on July 25, during a preseason friendly against FC Lausanne-Sport from Switzerland.

In August 2018, during another preseason match against German football club Bayer 04 Leverkusen, Lee scored his first goal with the club.

Although Lee didn’t make many appearances with Valencia for the rest of the season, he was good enough to be called up to Korea’s senior national football team. Korean national football team head coach Paulo Bento added Lee to the senior squad’s roster for a round of friendlies in March, but Lee never made it to the pitch.

Lee’s development at Valencia CF’s youth academy is reminiscent of two other young Korean stars - Paik Seung-ho and Lee Seung-woo. Paik and Lee Seung-woo both rose through the ranks in FC Barcelona’s youth system and have both begun to carve out careers in European football. After the U-20 World Cup in 2017, both players left Barcelona. Paik now plays for Girona FC in Spain and Lee plays for Hellas Verona in Italy.

Lee Kang-in may also be wearing a new uniform soon as there have been reports of other clubs showing interest in him throughout this year’s tournament.