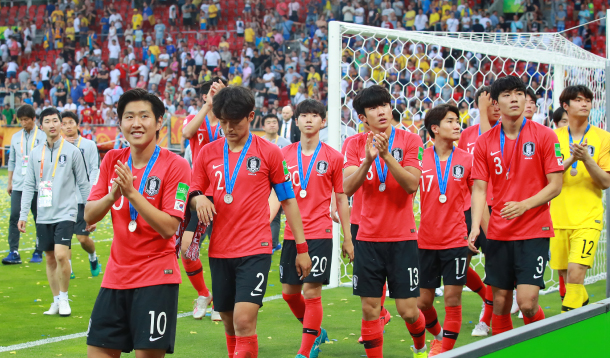 Korea’s U-20 team thanks the crowd after it received medals for its second-place finish after losing 1-3 to Ukraine in the 2019 FIFA U-20 World Cup final at Lodz Stadium in Lodz, Poland, on Saturday. [YONHAP]

Korea’s U-20 team fell at the final hurdle, missing out on World Cup glory after losing to Ukraine 3-1 in the final of the 2019 FIFA U-20 World Cup at Lodz Stadium in Lodz, Poland.

Korea started off strong, with Lee Kang-in scoring a penalty in the fifth minute of the game to put the score at 1-0. Just a few minutes later Ukraine had an opportunity with a direct free kick in the 11th minute, but failed to seriously trouble the Korean goalkeeper.

Korea’s second serious opportunity came in the 29th minute with a free kick just outside the box, but the young Taeguk Warriors were unable to make anything of it. Ukraine returned fire in the 33rd minute, with Vladyslav Supriaha scoring after Kim Hyun-woo was booked for a tackle from behind to put the score at 1-1 as the first half neared an end. 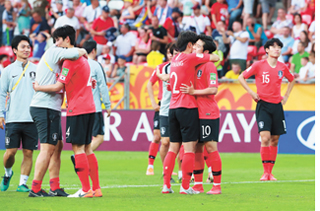 Korea’s U-20 football team members console one another after losing to Ukraine 3-1 in the FIFA U-20 World Cup final at Lodz Stadium in Lodz, Poland, on Saturday. [YONHAP]

Although the first half ended at 1-1, Ukraine still dominated in terms of possession, controlling the ball for 65 percent of the half.

Ukraine got off to a quick start in the second half, with Supriaha scoring his second goal in the seventh minute to take the lead 2-1. Korea’s defense struggled to deal with a quick counterattack from the Ukrainian team, which found itself in the box with very few players to get past, comfortably slotting the ball past the goalkeeper to take the lead.

Korea had a chance in the 24th minute of the second half, as a corner from Lee Kang-in headed toward the goal but was cleared off the line at the last minute. Korea won a second corner but again failed to convert.

Struggling to convert ended up being a recurring theme in the second half, with a scrappy but visibly tired Korean team repeatedly taking control in the midfield, sending the ball forward and failing to find a way through in front of goal.

Despite persistent attacks, Korea was unable to find a way past the strong Ukrainian defense. A quick counterattack in the 43rd minute of the second half saw Heorhiy Tsitaishvili score Ukraine’s third goal, the final nail in the coffin for Korea’s World Cup dreams.

“The players did the absolute best they could,” head coach Chung Jung-yong was quoted as saying. “And they executed everything tactically and strategically. As their coach, I didn’t quite give them the opportunity to succeed. I’ll try to learn from this experience.”

Despite missing out on the title, the U-20 team got further in the contest than any Korean men’s team ever, beating the 1983 U-20 team and the 2002 men’s squad, both of which finished fourth. The U-17 women’s team that took home the trophy at the 2010 FIFA U-17 Women’s World Cup remains the only Korean team to ever win a World Cup.

Although it was disappointing for the players and the coaches to walk away with a runner-up finish, Chung still complimented his players.

“I told the players that I’d be satisfied with whatever result we may get, as long as they did their best to prepare for the final,” Chung was quoted as saying. “Whatever we’re lacking, we can address that later. The guys didn’t feel too devastated about this. They should feel proud of reaching the final.”

Korea reached the knockout stage of the competition after coming second in Group F with two wins and one loss. The team got off to a slow start, losing its first game to Portugal 1-0, but bounced back with a 1-0 win over South Africa in game two and a shocking 2-1 victory over tournament favorites Argentina in the final match of the group stage.

Korea continued its momentum into the knockout stage, sending local rivals Japan home with a 1-0 win in the round of 16 before edging past a strong Senegal squad in a 3-3 game that the young Taeguk Warriors ultimately won on penalties.

A semifinal match against Ecuador saw Korea record its fourth 1-0 victory to earn a spot in the final.

“I’ve been surprised just how fast these players have improved,” Chung was quoted as saying. “They’ve grown right before my eyes. I think these players will be the best players in Korea in their respective positions over the next five to 10 years. I hope they’ll get more opportunities to compete on big stages. The future is bright for these players.”

Throughout the tournament, Korea finished with a record of four wins, a draw and two losses.

“During practice yesterday, I thanked them for everything they’ve done for this team,” Chung was quoted as saying. “And I am sure I’ll have a chance to work with them down the road. I’d like to take away only the fond memories from here.”

Ukraine tore through the competition to earn its spot in the final, drawing just one game - against Nigeria in the final Group D match - and comfortably knocking down the United States, Qatar, Panama, Colombia and Italy to reach the last two. At this year’s tournament, it is the only undefeated team, finishing with six wins and a draw.

The win was also historic for Ukraine, as its previous best result at the FIFA U-20 World Cup were round of 16 finishes during the 2001, 2005 and 2015 event. This is only Ukraine’s fourth time competing in the tournament.

A day before the final match, Ecuador defeated Italy 1-0 to finish in third, the country’s best-ever finish.

The Korea Football Association (KFA) announced on Sunday that Korea’s U-20 team will return home this morning and will have a welcome ceremony at Seoul Plaza starting at 12 p.m.

The KFA originally scheduled a parade after the welcoming ceremony but was canceled shortly after due to traffic reasons.