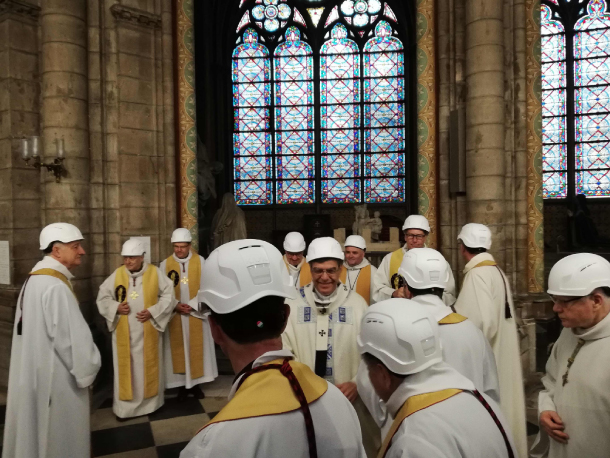 Donned in hard hats, worshippers attend the first mass at the Cathedral of Notre-Dame in Paris on June 15, exactly two months after the devastating blaze. [AP/YONHAP]

PARIS - The archbishop wore a hard-hat helmet, burnt wood debris was still visible and only about 30 people were let inside, but the Cathedral of Notre-Dame in Paris on Saturday held its first Mass since the devastating April 15 fire that ravaged its roof and toppled its masterpiece spire.

Exactly two months after the blaze engulfed the landmark Gothic building in the French capital, the service was celebrated by Paris Archbishop Michel Aupetit in a chapel behind the choir, a place confirmed by construction experts as safe.

French Culture Minister Franck Riester said this week the cathedral remains in a “fragile” state, especially its vaulted ceiling, which is still at risk of collapsing.

For security reasons, only about 30 people - mainly priests, canons and church employees - were admitted inside the cathedral for the service, while Aupetit and others wore construction worker’s helmets. Some of the workers rebuilding the church were also invited.

Other worshippers could watch the Mass live on a Catholic TV station. The video showed some burnt wood still in the church, but a famous statue of the Virgin and Child appeared intact behind wooden construction planks. It is still unclear when the cathedral will reopen to the public.

Meanwhile, the billionaire French donors who publicly proclaimed they would give hundreds of millions to rebuild Notre Dame have not yet paid a penny toward the restoration of the French national monument, according to church and business officials.

Instead, it’s mainly American and French individuals, via Notre Dame charitable foundations, who are behind the first donations paying the bills and salaries for up to 150 workers employed by the cathedral since the April 15 fire. This month they are handing over the first private payment for the cathedral’s reconstruction of 3.6 million euros ($4 million).

“The big donors haven’t paid. Not a cent,” said Andre Finot, senior press official at Notre-Dame. “They want to know what exactly their money is being spent on and if they agree to it before they hand it over, and not just to pay employees’ salaries.”

Almost $1 billion was promised by some of France’s richest and most powerful families and companies, some of whom sought to outbid one another, in the hours and days after the inferno. It prompted criticism that the donations were as much about the vanity of the donors wishing to be immortalized in the edifice’s fabled stones than the preservation of France’s church heritage.

None of that money has been seen, according to Finot, as the donors wait to see how the reconstruction plans progress and fight it out over contracts.

The reality on the ground at Notre-Dame is that work has been continuing around the clock for weeks and the cathedral has had to rely partly on the charity foundations to fund the first phase of reconstruction.

The Friends of Notre-Dame de Paris was founded in 2017, and its president, Michel Picaud, estimates that 90 percent of the donations it has received have come from American donors. Indeed, Picaud just returned from a fundraising trip in New York.