From left: Farmers install fences against wild boars as a part of prevention measures against African swine fever on June 8 in Cheorwon County, Gangwon. Prime Minister Lee Nak-yon examines the border with North Korea at a military base in Cheorwon County on June 8. Authorities disinfect vehicles at Tongil Bridge, which connects to the civilian controlled zone just south of the demilitarized zone, on June 3. [YONHAP]

Since North Korea reported an outbreak of the African swine fever virus to the World Organisation for Animal Health late last month, concerns have increased south of the border about the potential spread of the deadly disease by border-hopping pigs.

The 160-mile border between the two Koreas, a zone of barbed wire, land mines and sniper outposts, has so far served as an effective barrier against hogs carrying the virus.

“If there were no border barrier, pigs would just cross over to South Korea,” said Lee Won-sang, who operates a pig farm in Paju, a border city near the demilitarized zone (DMZ). “While we’re still concerned about the disease, it’s a relief that we at least have steel fences along the border.”

South Korea is one of the remaining countries in Asia unaffected by the deadly disease, which is usually spread by contact between pigs and contaminated feed.

Outbreaks were limited to Africa and Europe in the past, but spread to Asia last year. China culled over one million pigs in the past year because of the disease.

According to the European Food Safety Authority, the disease only affects pigs or wild boars. There is no cure or vaccine, and it is usually fatal.

The 66-year standoff with North Korea has effectively created a buffer against the disease.

Yet concerns remain that infected wild boars from the North could roam south. The government is not taking chances. 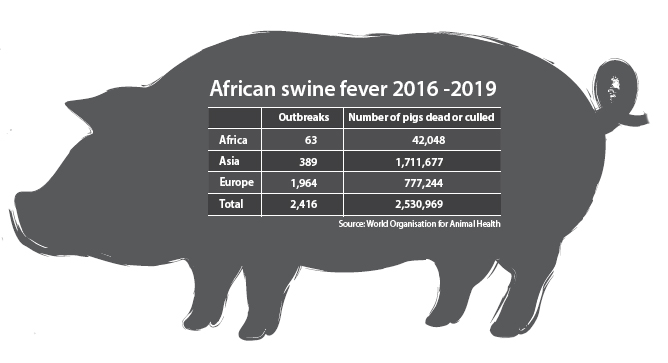 Since the outbreak in North Korea, the government has implemented disinfection measures in 14 areas at the border with the North.

All vehicles and people who enter South Korea from two immigration offices at the inter-Korean border currently undergo disinfection.

Aside from the regular protocol of disinfection and inspection of pig farms near the border, the military has authorized soldiers to kill North Korean wild boars on sight.

“Troops near the border have been told that they can capture or kill wild boars from North Korea that cross over to our side,” said a Ministry of National Defense official, explaining that such measures on the South Korean side wouldn’t violate rules of engagement.

“We have notified the United Nations Command of our plans,” the official added.

Regional governments are taking the quarantine efforts a step further.

“The government checks on farms every week on disinfection measures,” explained Lee. “It’s taking the situation quite seriously.”

Cheorwon County, which borders North Korea in the center of the Korean Peninsula, has provided aid to farms to install 1.5-meter (4.9-foot) high fences that would eliminate contact between farmed pigs of South Korea and boars from North Korea.

“We’re currently working with 30 pig farms in the county to install fences,” explained a Cheorwon County official. “We have also conducted a survey on whether to supply traps for wild boars.”

“We’re actually concerned more about contamination through feed,” said Kim Yeon-chang, who has operated a pig farm in Cheorwon since 2001.

“With soldiers on patrol for pigs, it will be more difficult for pigs to cross over,” added Kim.

Confidence is high when it comes to stopping pigs by land. The question is whether the sea is properly defended, as the hogs can swim.

“Pigs are very good at swimming,” said Prime Minister Lee Nak-yon during his visit on June 1 to Ganghwa Island near the Imjin River, which crosses the DMZ. “While the inner-land border has barbed wire, the Imjin River could be vulnerable.”

Lee has visited the border area three times this month to raise awareness about the disease.

On top of monitoring North Korean activity, marines stationed in the Han River estuary are now checking for floating wild boar carcasses. The quarantine measures come as the country recovers from outbreaks of foot-and-mouth disease that led to the culling of over 200,000 animals over the past five years. The past experiences of mass culling have led the country to take extra precautions.

“African swine fever [ASF] is a more severe disease when compared to foot-and-mouth disease,” said Choi In-soo, a professor at Konkuk University’s College of Veterinary Medicine. “While foot-and-mouth vaccines are available, there is nothing of the sort for ASF.”

Experts say that along with quarantine measures near the physical border, there should also be a focus on clamping down on illegally imported feed that could be tainted with the virus.

“The most dangerous route for contamination is the import of illegal feed,” explained Kang Gi-jong, the secretary general of the Korean Association of Swine Veterinarians. “There are concerns about the spread of the virus by pigs eating feed illegally imported from countries that have had outbreaks of ASF.”

“Border control is still very important, and similar measures have already been undertaken in Eastern European countries … The measures may seem rash, but for pig farmers it’s a matter of their livelihood,” added Kang.

Reconnecting with the North

The government is hoping to restart dialogue with North Korea through concerted quarantine measures against the disease.

On May 31, a day after North Korea reported the disease to the international community, the South’s Unification Ministry sent an official request to North Korea to cooperate on quarantine measures against the disease.

“We will contact the North through the liaison office and create specific measures for cooperation with other South Korean ministries,” said Lee Eugene, the ministry’s deputy spokeswoman at a press briefing last month.

“The South is ready to cooperate with the North to prevent the spread of the outbreak.”

It remains uncertain whether Pyongyang will accept this offer.

“We have already told the North multiple times about our intention to help with disinfection,” added Lee.

According to a Unification Ministry official on Friday, South Korea is still waiting for a response.

At the moment, farmers in border towns place trust in the barbed wire and patrolling troops.

“The division is a tragedy of our nation,” said Lee. “It’s ironic, but it serves a purpose to keep the disease out.”