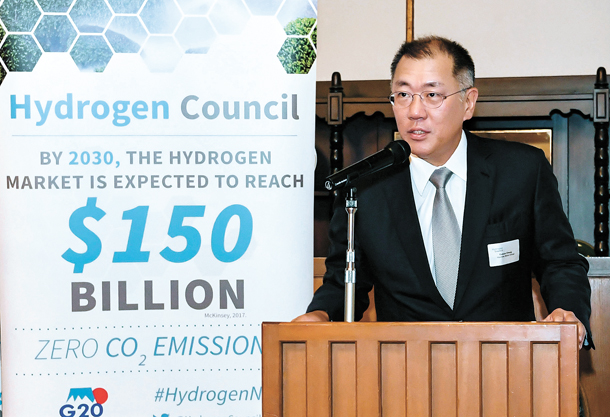 Hyundai Motor Group called for support in developing hydrogen-based industries at a Group of 20 (G-20) meeting of energy and environment ministers to speed up efforts for a global transition to sustainable energy sources.

“The hydrogen economy is the surest way for a successful energy transition in the future,” said Chung at a meeting on Saturday, attending as the co-chair of the Hydrogen Council, a lobby for the energy source.

“The Hydrogen Council is currently working with many governments, international organizations for a global energy transition […] we need leaders from all fields, [not] just energy and transportation, to realize a hydrogen economy,” Chung added.

“G-20 countries should include hydrogen in their respective energy transition strategies,” said Poitier at the meeting.

The ministerial meeting released a joint statement and an action plan to strengthen cooperation between the member countries in their transition to cleaner forms of energy, including hydrogen according to the Ministry of Trade, Industry and Energy.