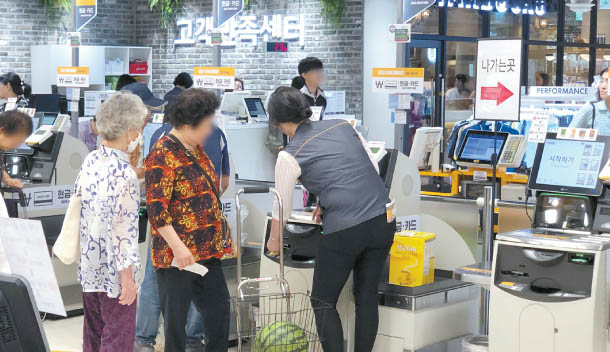 Elderly shoppers being assisted by Emart employees in using the automated cash registers installed at the Chang-dong branch on Thursday. [NAMGUNG MIN]

Some 50 Emart workers who are members of the Korean Federation of Service Workers’ Union gathered in front of the discount mart’s Chang-dong branch in northern Seoul around 10 a.m. on Thursday.

The discount mart branch on Thursday installed 16 automated cash registers while cutting down the number of conventional registers from 12 to two.

“[Management] is directing customers to use the automated system by letting a long line form at the cashier counters,” said Jeon Soo-chan, head of the branch’s union. “The cashiers are worried about being placed in other departments or to entirely different branches.”

Jeon said the automated system will alienate elderly shoppers and those with disabilities.

Customer response to the newly installed automated system has been mixed.

Most of the customers in their 20s and 30s had no problem using the machines without the help of employees.

“It wasn’t that hard to use, and the entire process ended quickly,” said a 29-year-old shopper surnamed Kang. “It was great that I didn’t have to face an actual person.”

Some older shoppers struggled, and a long line of elderly shoppers formed behind the two remaining cashiers.

“I don’t understand why I’m doing my own payment processing when I’m purchasing the products with my own money?” said a 63-year-old shopper who used one of the automated cash registers.

Emart said it has come up with measures to prevent the loss of jobs or the alienation of older shoppers.

“We have not fired any single one of the 31 cashiers that are regular workers, and we have stationed employees to help guide older people and people with disabilities,” said an Emart official, who requested anonymity.

The Emart official said adopting the latest technology is obvious considering that the number of people living alone has been rising, while more customers prefer a service where they don’t have to face employees.

Emart said depending on the success of the trial at the Chang-dong branch, the discount mart will decide whether it will expand the automated system to other branches.

The retail industry isn’t the only one faced with conflicts with employees over adopting new technologies.

Another is the tower crane industry.

The operators demanded that the use of unmanned tower cranes be stopped, citing safety problems.

The construction industry says the strike was also about the fear of job losses.

This problem is also evident in transportation sector, where taxi drivers are opposing tech-driven services that they claim threaten their very livelihoods.

Industry experts say the government has to think hard about protecting workers along with technology innovation.

“Insecurity over jobs has gone up as wage issues are now connected with technology innovation,” said Lee Byoung-hoon, Chung-Ang University professor of sociology.

“Conflict will only grow if it is left to every business to make their own decisions, and it will be difficult to come up with solutions,” the professor added. “We have to pursue both innovation and protection of workers, as it is the case in Germany with its Labor 4.0, which includes not only the innovation strategy - Industry 4.0 - but also includes expansion of employment insurance and active vocational training.”

Some experts say companies need to think about ways of retraining employees so that the impact from changes would be minimized.

“Companies have to think about ways to reassign workers and how they will educate workers replaced with the latest technology,” said Kim Soo-wook, Seoul National University professor of operations management. “Through this, workers will not only learn new technologies but their skills be raised as well.”