Biegun may arrive before Trump

Biegun may arrive before Trump 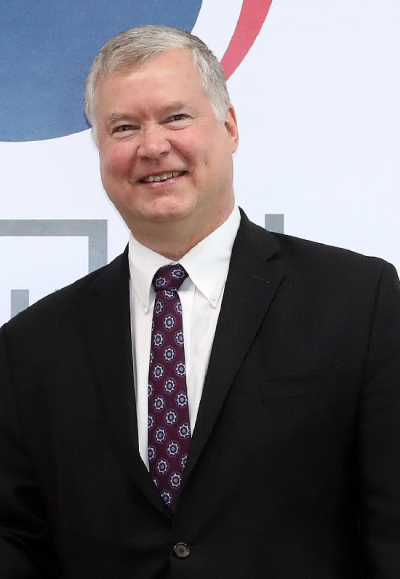 U.S. Special Representative for North Korea Stephen Biegun is expected to arrive in Seoul this month before U.S. President Donald Trump’s own visit to the South, amid hopes for a possible meeting between Biegun and his North Korean counterpart in denuclearization talks.

Multiple diplomatic sources said Sunday that Seoul and Washington are jointly pushing for a working-level meeting between the United States and North Korea before Trump’s visit to Seoul, which is believed to take place on June 29.

The allies are said to be hoping that a meeting occurs between Biegun and Choe Son-hui, the North’s vice foreign minister, to revive denuclearization talks that have stalled since the second U.S.-North Korea summit collapsed in Hanoi, Vietnam, in late February.

Pyongyang, however, has yet to respond to the dialogue offer, the sources said on the condition of anonymity.

Even if the North doesn’t agree to hold a Biegun-Choe meeting, Biegun will still visit Seoul before Trump touches down, the sources said, adding that the exact date depends on North Korea’s response to the working-level meeting offer.

Trump is expected to arrive in Seoul on June 29 after he attends the Group of 20 (G-20) summit in Osaka, Japan, on June 28 and 29. The U.S. State Department said last week that Secretary of State Mike Pompeo will accompany Trump to Korea to meet with Moon following the G-20. In that case, Biegun could arrive within the next 11 days.

Biegun’s South Korean counterpart Lee Do-hoon, who serves as Seoul’s special representative for Korean Peninsula peace and security affairs at the Foreign Affairs Ministry, is expected to discuss ways for North Korea to return to the discussion table when he meets Biegun this week in Washington.

Lee and Biegun are specifically planning to talk about North-U.S. relations, ways to establish a peace regime on the Korean Peninsula, humanitarian aid to the North, as well as Biegun’s imminent visit to Seoul, sources with knowledge of Lee’s itinerary said Sunday. The two envoys won’t, however, discuss possible sanctions relief, the sources noted.

On Wednesday, Biegun and Lee are scheduled to make a keynote speech during a forum jointly hosted by the Atlantic Council and the East Asia Foundation in Washington.

According to sources with information on a closed-door meeting hosted by the Council on Foreign Relations, a non-government think tank, last Wednesday in New York, Biegun told participating North Korean pundits that he thought Pyongyang could be preparing to resume denuclearization talks with the United States.

Some recent signs from the regime that indicated this include North Korean leader Kim Jong-un’s letter to Trump, Biegun reportedly said, as well as Kim’s decision to send his younger sister, Kim Yo-jong, to meet South Korean officials to offer his condolences for the passing of Lee Hee-ho, widow of former South Korean President Kim Dae-jung.

Exactly what Kim told Trump in his letter is not publicly known. Moon said last week during his Nordic tour that the United States had informed him about the contents of the letter “in general,” adding there were “some interesting parts.”

Citing an unidentified U.S. government source, CNN reported that the letter was a “birthday greeting” from Kim to Trump ahead of Trump’s birthday last Friday, and that the letter did not contain any details on a way forward for the stalled denuclearization talks between the two countries. Whether a third summit between the leaders was mentioned is unknown, but Trump told reporters while he announced the letter from Kim that another summit “could happen,” though he wants to “bring it further down the line.”

Moon publicly suggested a fourth summit to the North last Wednesday during a forum in Norway, saying he was prepared to talk to Kim “at any time, any place, regardless of the format,” but the regime has yet to respond.