Moon puts an emphasis on lower-level talks with North

Moon puts an emphasis on lower-level talks with North 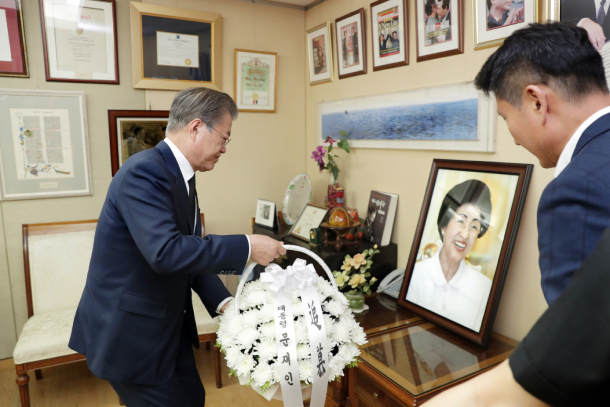 Before returning from his weeklong trip to Northern Europe, South Korean President Moon Jae-in stressed the need for preliminary working-level talks between the United States and North Korea to avoid a repeat of their failed February summit in Hanoi, Vietnam.

In a press conference on Saturday following his summit with Swedish Prime Minister Stefan Lofven, Moon said the leaders of the United States and North Korea remained willing to pursue dialogue, but that he could not yet reveal what kind of negotiations would take place between the two parties. Moon added that after his administration reopened dialogue with the North after he took power in 2017, “communication [with the North] has always been taking place through various different channels.”

These words, possibly the most revealing from South Korea’s leader on the stagnant engagement process with Pyongyang, came on the last day of Moon’s weeklong visit to Nordic countries, which took him to Finland, Norway and Sweden.

The remarks also represent a departure from a focus on the top-down approach that all parties appeared to favor in their diplomatic engagements so far by stressing the need for continuous lower-level talks.

One key Blue House official later said the president’s words meant that working-level talks should first compress and fine-tune the key items on the agenda that the leaders of the United States and North Korea could eventually agree to on a top-down basis.

On Friday, Moon gave a speech to Sweden’s parliament urging the North to demonstrate its “commitment to completely dismantle its nuclear weapons” by resuming dialogue with the United States or South Korea.

After his address and shortly before departing for his return to South Korea, Moon again underscored his hope for another inter-Korean summit before U.S. President Donald Trump’s scheduled visit to Seoul in late June following the Group of 20 summit in Osaka, Japan, on June 28 and 29.

With just around two weeks left until that deadline, South Korea’s government appears to be concentrating its efforts on holding a fourth meeting between Moon and North Korean leader Kim Jong-un while building on the conciliatory messages that Pyongyang delivered last week to pay its respects on the death of Lee Hee-ho, widow of former South Korean President Kim Dae-jung.

On Saturday, the North’s state media released several different pieces celebrating the 19th anniversary of the June 15 declaration - the agreement signed by Kim Dae-jung and the North’s previous leader, Kim Jong-il, in their first-ever summit in 2000.

The Rodong Sinmun, Pyongyang’s leading mouthpiece, ran an editorial that elevated Moon and Kim Jong-un’s agreements signed at their first and third summits last year, saying that they opened a new era for peace on the Korean Peninsula.

While neither Pyongyang nor its state media has yet to produce a response to Moon’s calls for renewed talks, these recent commentaries stand in contrast to the harsh tone used by the North’s outlets toward South Korea in recent weeks over frustration of Seoul’s compliance with the U.S. campaign against the North’s economy.

Much of Moon’s trip to Northern Europe, where former President Kim Dae-jung received the Nobel Peace Prize for his efforts in building peace between the Koreas, was devoted to breathing new life into the stalled denuclearization negotiations.

Yet the president also took time to stress economic cooperation with the three Nordic countries, particularly in the fields of science and technology, and involving small- and medium-sized companies.

Among the various memorandums of understanding Moon signed with Sweden was an agreement to cooperate in fostering start-ups based on the two countries’ similarities in their focus on information and communication technology.

Immediately after returning to Korea on Sunday, Moon and his wife, first lady Kim Jung-sook, met with Lee Hee-ho’s family to extend their condolences on the former first lady’s passing and honor her legacy in working for inter-Korean reconciliation.