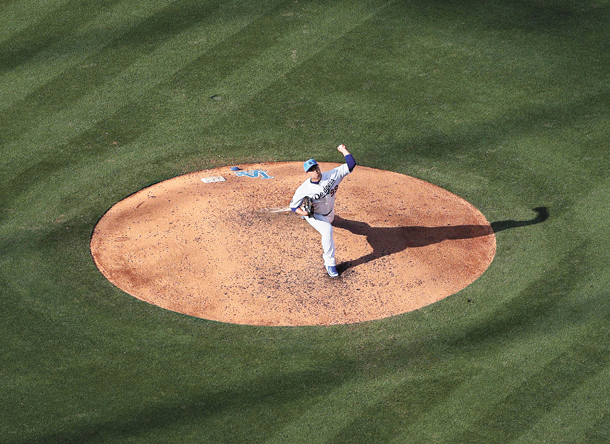 Ryu Hyun-jin of the Los Angeles Dodgers throws a pitch during a game against the Chicago Cubs at Dodger Stadium on Sunday. [GETTY IMAGE/YONHAP]

Los Angeles Dodgers’ starter Ryu Hyun-jin will have to wait for another chance to reach win No. 10 for the season.

The Korean left-hander settled for his second consecutive no-decision against the Chicago Cubs at Dodger Stadium in Los Angeles on Sunday. Ryu gave up two runs, both unearned, over seven solid innings but was relieved at the start of the eighth with the score tied at 2-2. The Dodgers went on to win 3-2.

Ryu remains at 9-1 for the year, but he lowered his major league-best ERA from 1.36 to 1.26. He struck out eight and didn’t walk anyone. The last time Ryu issued a free pass was on May 30 against the New York Mets. In 93 innings in 2019, Ryu has 85 strikeouts against only five walks.

Ryu’s only loss of the season came all the way back on April 20 against the Milwaukee Brewers. He had gone 7-0 with a 0.82 ERA over his next nine starts before this one.

Ryu pitched around a pair of two-out singles in the top of the first inning. After the Dodgers gave Ryu a 1-0 lead in the bottom first with a bases-loaded walk, the pitcher responded with a three-up, three-down inning in the second.

Javier Baez got an infield single with one out in the third, only to be erased by an inning-ending double play ball off the bat of Kris Bryant.

Ryu induced three consecutive groundouts in the fourth. Albert Almora Jr. led off the fifth with a single, but was stranded there as Ryu picked up two more strikeouts in another scoreless frame.

After mostly cruising through the first five innings, Ryu got into a jam in the sixth, undone by a rare infield error and some unfortunate bounces.

Baez reached first base on a throwing error by third baseman Justin Turner. Kris Bryant followed up with a blooper single to shallow right field, and Baez advanced to third on the play to put the men at the corners with nobody out. It was the first time during the game that the Cubs had a runner at third base against Ryu.

Anthony Rizzo lined out to third for the first out, but Willson Contreras beat the infield shift and sent a soft roller toward the gaping hole to the right side to drive in the tying run.

Second baseman Max Muncy was positioned behind the second base bag, and he would have fielded Contreras’ ball to start a possible inning-ending double play from his normal spot.

Prior to this game, opponents had gone only 2-for-54 with two singles against Ryu with runners in scoring position.

David Bote then put the Cubs up 2-1 with a sacrifice fly to right field. Cody Bellinger made a nice running catch on a ball that wasn’t hit particularly deep, but with his momentum carrying him toward the foul line, Bellinger was unable to make a strong throw home to get Bryant at the plate.

Almora Jr. singled to keep the rally going for the Cubs, before Ryu struck out Jason Heyward to end the inning. Both of the Cubs’ runs in the sixth inning were unearned.

Ryu worked a clean seventh inning and handed the reins over to Ross Stripling to begin the eighth.

Ryu made 94 pitches, 68 for strikes. He has yet to give up more than two earned runs in any of his 14 starts this year.

The Dodgers scored the go-ahead run in the bottom eighth and held on for the narrow win.

Of Ryu’s eight strikeouts, seven were of the swinging variety, with his changeup responsible for four of them.