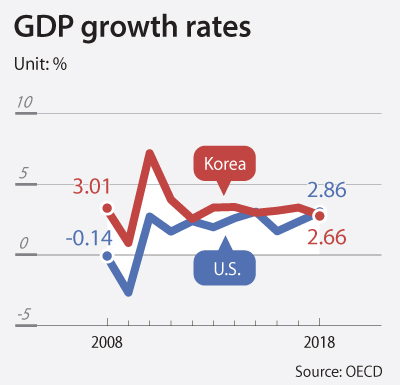 For the first time in more than two decades, the United States is set to outperform Korea as measured by two key statistics.

Its GDP will likely grow faster, and its unemployment rate is seen coming in lower in 2019. The last time the United States performed better by these measures was in 1998, the year after the Asian financial crisis began.

According to the OECD, Korea’s unemployment rate was 5.91 percent points lower than the United States in 2010. But that gap has been narrowing ever since.

Last year, it was 0.07 percentage points - Korea’s unemployment rate was 3.83 percent while that of the United States was 3.9 percent.

In terms of quarterly numbers, the graphs have already crossed. The U.S. unemployment rate has been lower than Korea’s since the third quarter of 2018.

Last month, the rate went down to the lowest in 50 years, 3.6 percent. Korea’s unemployment rate has remained above 4 percent for five consecutive months.

The Korean government has been compiling unemployment statistics since 1989. That figure was higher than the corresponding figure in the United States between 2008 and 2010.

With U.S. President Donald Trump pushing for regulatory and trade reform and higher levels of investment, hiring has been strong. The unemployment rate in the United States, which was around 10 percent in 2010, has dropped to the 3 percent range.

Since hitting 3.1 percent in 2013, the unemployment rate in Korea has been creeping up.

The rate has increased for a number of reasons. Analysts cite restructuring in manufacturing, a fall in corporate investment and rising labor costs.

“If it’s hard for the government to completely change course on the income-led growth policy, it should at least freeze the minimum wage for next year,” said Shin Se-don, a Sookmyung Women’s University economics professor.

The U.S. economy is already growing faster than Korea’s. Last year, GDP in the former was up 2.86 percent compared with 2.67 percent in the latter.

And this gap is expected to widen this year.

The OECD recently upped its forecast for U.S. economic growth for this year to 2.8 percent from 2.6 percent. In the same report, the OECD lowered its estimate for Korea’s GDP growth in 2019 from 2.6 percent to 2.4 percent.

If the forecast is correct, 2019 would be the second year in a row in which the United States enjoyed economic growth faster than Korea has.

Major Korean industries, from shipbuilding to automobile manufacturing, are losing their competitiveness, with exports falling as a result. Falling domestic investment and a shrinking domestic market haven’t helped.

The only time the U.S. economy grew at a faster pace than Korea’s was during times of major economic crisis, such as oil shocks, the IMF crisis and the Middle East Respiratory Syndrome (MERS) crisis in 2015.

The weak economic performance is not just relative to the United States.

Korea, which posted a quarter-to-quarter economic contraction of 0.4 percent January to March, reported the slowest growth among OECD members in that quarter.

“It is unlikely that economic conditions will improve later this year, while unfavorable external factors, such as the trade war between the United States and China, are becoming more significant, while semiconductor exports are declining,” said Kang Sung-jin, an economics professor.

“But it’s worrying that the current situation of slow growth and high unemployment will continue for a long time.”