Capturing living history through family portraits: Photographer Cho Jang-sok has found his calling by giving back

Capturing living history through family portraits: Photographer Cho Jang-sok has found his calling by giving back 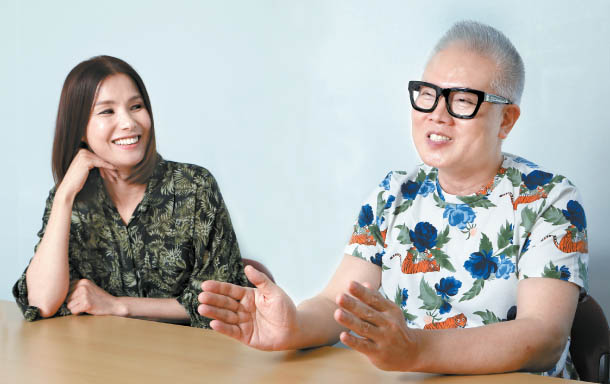 Photographer Cho Jang-sok and model Park Dool-sun, his wife, talk about their recent trip to Ethiopia during an interview at the Korea Foundation’s Seoul office on May 29. Together with the foundation, Cho is traveling to poor regions in Africa and taking family pictures. [PARK SANG-MOON]

When photographer Cho Jang-sok met his wife, supermodel Park Dool-sun, over 20 years ago, he was working for the country’s top fashion magazines, snapping dazzling shots of young and beautiful models clad in luxury labels.

Cho is still a professional photographer, but these days, he’s traveling to some of the world’s most impoverished regions to take family portraits.

In late May, the Korea JoongAng Daily sat down with the couple just a few days after they had arrived from Cho’s latest photo shoot in Ethiopia. The African country was the first of three stops, ahead of Uganda and Madagascar, that Cho visited as part of a recently launched project by the government-affiliated Korea Foundation (KF).

In Ethiopia, Cho and the KF chose to highlight families of Korean War veterans, as an annual commemoration ceremony for those who had served fell during the trip. More than 6,000 Ethiopian soldiers participated in the 1950-53 Korean War as part of the United Nations forces, with casualties numbering around 120 killed and 500 wounded.

“Veterans who participated in the Korean War suffered post-traumatic stress disorder and physical injuries,” explained Cho. “After they returned to Ethiopia, they had a hard time making a living and providing for their children.”

For two weeks in May, Cho and Park traveled around the capital city of Addis Ababa and neighboring areas, visiting the homes of Korean War veterans with the support of the local Korean Embassy and a veterans’ association.

“We didn’t just take the pictures and leave - we listened to the veterans’ life stories and war anecdotes,” said Park. “Some homes were gloomy. One veteran who had been wounded from two gunshots during the war told us he resented Korea.”

Subjects in Cho’s pictures reveal a variety of expressions. Some veterans stare grimly into the camera as they pose in their finest suits. A little girl smiles brightly in her faded pink ballerina dress in one, while another shows a family of eight leaning against the balcony as the children grin and the adults look amused.

From left: A family portrait of Reta Wordofa, a veteran of the 1950-53 Korean War. Middle: Taye Shumeye, another Korean War veteran who went to Korea when he was 21. Right: A war cemetery for Ethiopian soldiers who participated in the Korean War. More than 6,000 Ethiopian soldiers came to Korea as part of the United Nations forces, with casualties numbering around 120 killed and 500 wounded. [CHO JANG-SOK]

After Cho is done going through and touching up his photos, he plans to mail framed prints back to the Korean Embassy there for distribution to corresponding families.

Since 2015, Cho has dedicated himself to photographing families in the developing world who would otherwise have no access to portraits.

A spiritual awakening during a trip to Israel in 2010 inspired Cho to move on from commercial photography and use his skills for a greater cause. Cho got the chance to follow his passion when he and Park were appointed to serve as honorary ambassadors for the NGO A Better World, where he launched his family portrait project. Hoping to reach even more beneficiaries, Cho proposed the project to the KF, an organization associated with the Ministry of Foreign Affairs that facilitates cultural exchange. After a year of careful deliberation, the KF approved the project.

There are several reasons why Cho focuses on the family. In one trip to Senegal, Cho realized family pictures were the only way some could remember relatives after their death.

“When I went to Senegal a few years ago, the local guide told me that he couldn’t remember his mother’s face after she passed away when he was 4 because they didn’t have a picture of her,” Cho recounted. “He was happy that he could be a guide for a project that would prevent others from facing the same problem.”

Family pictures also bring out the best in people, Cho believes, which is important in presenting an accurate depiction of the places he visits.

Cho’s family portraits are sometimes displayed in Korea. The pictures he took in Ethiopia are scheduled to be exhibited at Dongdaemun Design Plaza for the KF’s Public Diplomacy Week this October.

“Even if people are in difficult situations, they’re hopeful when they’re with their families. No matter how poor you are, you’ll laugh and have a good time when you’re with your loved ones.”

Already four years into his family portrait project, Cho said that friends have suggested he take on more ambitious assignments that go beyond just taking and sending pictures.

Yet his current tasks come with enough challenges of their own, and the last thing Cho wants to do is plant false hopes.

“There were times before when I couldn’t keep my promises,” Cho admitted. “I would have all the photos with me at home, but there was no way for me to deliver them.”

“That’s why for this trip, we even canceled visits to some villages so we could make sure the pictures reached everyone,” added Park.

Busy with her own career, Park doesn’t always join Cho during his trips. The visit to Ethiopia helped her better understand what Cho’s work means to him.

“Before, I couldn’t understand my husband and told him to go earn more money,” she said. “But when I followed him on this trip he seemed really happy, especially when he saw that he was making others happy.”

With Cho fully intent on continuing the family portrait project long-term, the couple is readying themselves for the possibility of leading a nomadic lifestyle together as Cho travels around the world.

“My wife learned how to bake and I studied coffee roasting,” Cho said. “When we’re older, maybe we will operate a small bakery cafe that we can easily set up and take down, hanging up the pictures I took on the wall for all to enjoy.”