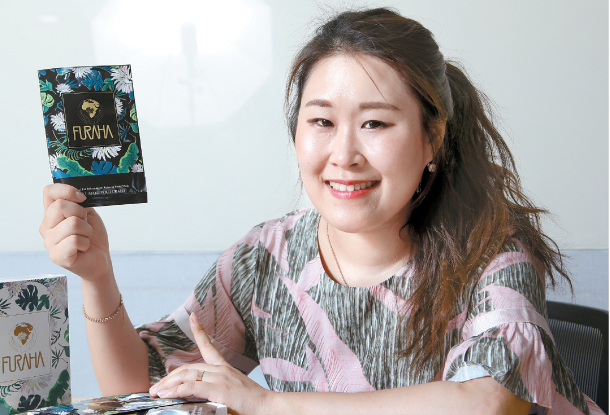 Ko Yu-young, 30, is the CEO of Furaha, a Korean skin-care start-up based in Nigeria. Ko says she wants to market products that match skin types common in African people. Her ultimate goal is to establish business infrastructure that could help Korean companies enter the African market. [PARK SANG-MOON]

Africa is often seen as a potentially lucrative market. Despite the possible opportunities there, many Korean businesses are passive about investing in the continent.

While most - even the large conglomerates - have maintained this attitude, a 27-year-old former public employee jumped into the market with the goal of forming a skin care business.

“After a trip to Africa, I wanted to help [struggling] women in Africa become financially independent so they would not have to rely on [jobs such as] prostitution for a living,” said Ko at an interview with Korea JoongAng Daily on June 12. “After seeing how some women in Africa treat their skin, I decided to form a skin care-related business.”

Ko was motivated to bring Korean beauty to Africa after seeing a woman put bleach on her skin in hopes of making it look brighter for her wedding. According to Ko, that bride wasn’t the first woman she had seen who used bleach that way.

“Every woman, including African women, wants to look beautiful, but not many women in Africa seem to understand how beautiful their skin is,” said Ko. “They’re very interested in makeup products that could make their skin look fairer and more colorful, but there seems to be a lack of understanding of how to remove heavy makeup or how to take care of one’s skin. This often results in skin problems.”

Furaha, Ko’s business, is now in its third year of operation. The name means happiness in Swahili. Based in Nigeria, the company sells facial mask packs, provides skin care education to African women as part its corporate social responsibility efforts, and participates in beauty exhibitions to represent Korean beauty products on behalf of other brands. According to Ko, she was able to launch a business in Africa without much fear because she was opening a start-up, not branching out to a new location in the employ of a conglomerate.

“Unlike conglomerates that have to fulfill high expectations and the extra salaries that have to be paid to the employees, all I had to do was to take care of myself. I spent time building personal connections with locals and conducted market studies with my own two feet.”

Ko says Furaha’s ultimate goal is to establish an infrastructure strong enough to help Korean companies enter the African market without having to go through all the hassles she had to endure.

Below are the edited excerpts from the conversation with Ko. 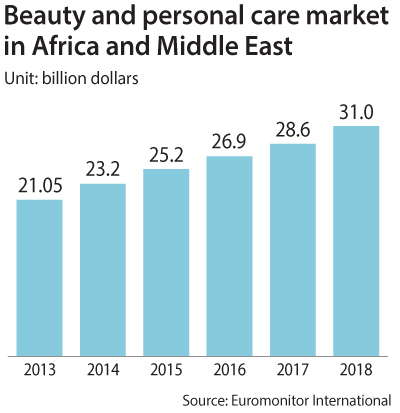 A. Before opening Furaha, I worked at Seoul National University in administration. While working there, I got to befriend public officials from Tanzania who came to Korea to be trained.

After working at the university for a year, I quit my job and went on a trip to Africa, thinking about the stories I had heard from my Tanzanian friends. While traveling, I saw women who relied on prostitution for a living. I wanted to help them create value in different ways so they could become financially independent.

Why did you choose the skin care business?

Every woman wants to be beautiful, including African women. Lots of African women lack understanding of how to use skin care products. They are very interested in makeup, like lipsticks and eyeshadows, but often overlook the need to take care of their skin. They spend two-thirds of their incomes on beauty items, like fake nails, but are reluctant to invest in skin care products. After putting on heavy makeup, they try to erase all that makeup with soap without much success. They consequently suffer skin problems. Instead of trying to improve their skin, however, they put on heavier makeup, creating a vicious cycle. My role is to help them realize the importance and the beauty of their skin.

What is your business model?

Currently, my main source of profit is Furaha facial mask packs. Made primarily from tea tree oil and green tea, the facial mask packs have been specifically designed for skin types often found in people from Africa.

My ultimate goal is to establish a business infrastructure that could help Korean businesses enter the African market. But there is still a long way to go, and therefore, I chose to sell facial mask packs as a solution to earn profit and raise the brand reputation until I get to build the business infrastructure. I also provide education to Africans on how to use skin care products as part of my corporate social responsibility via Korea Trade-Investment Promotion Agency. I also participate in African exhibitions, like West Africa Beauty, where various products are demonstrated to African buyers. I bring Korean products from a group of brands that want to test their products in Africa.

What are some major challenges of running a business in Africa?

Doing business in Africa is tough. As a foreigner, it was very challenging to obtain trust from local business operators. They wanted to make sure that I don’t take advantage of them, and that I would be doing business in Africa for a long time. To gain their trust, I established a corporation in Nigeria. I also hired African employees to work for my company.

Another difficulty is the different mindset. Similar to many Koreans, I’m quite an impatient person. I need to get things done very quickly. But in Africa, things are very slow. It took me 15 days to open a bank account, and I was told that was fast. The slow-going attitude often delays business meetings, which can take several hours to days. Temporary loss of electricity is another common issue, which makes communication with local workers difficult.

I want to help Korean companies enter Africa and avoid all the hassles.

Why did you choose Nigeria as your base market in Africa?

Nigeria is a country where trends often begin in Africa. They then spread to the other western African countries, like Ghana, and ultimately to eastern Africa. Nigeria also has a population of more than 200 million people.

One common bias people seem to have about Africa is that everything is and should be cheap. There are many business operators that show interest in the African market, but a lot of them just walk away after realizing how much they would have to invest to market their products in Africa. Attending an exhibition on the continent, for instance, will cost around 10 million won ($9,000) while getting an approval from the local food and drug administration costs around 7 million won. The prices are similar to those in some markets in Southeast Asia, like Thailand and Vietnam, but not many business operators are willing to invest that much money in the African market.

Hallyu (the Korean wave) is also big in Africa. Does the fact that Furaha is from Korea help your business?

Korea has a good reputation in Africa. People willingly purchase products even if they were only designed by Korea, not made in Korea. Also, Africans tend to think that Korean goods, even secondhand products, last long.

BTS and Korean dramas are big in Africa. Stories with themes that encourage good and punish the evil are popular.

“Descendants of the Sun” (2016) and “Boys Over Flowers” (2009) are among several Korean series well-received in Africa. Africans learn about Korean culture by watching these programs, which I believe will help Korean brands increase their presence in the African market.