‘Aladdin’ reaches unbelievable heights once again: The live-action Disney musical returns to No. 1, beating out ‘Parasite’

‘Aladdin’ reaches unbelievable heights once again: The live-action Disney musical returns to No. 1, beating out ‘Parasite’ 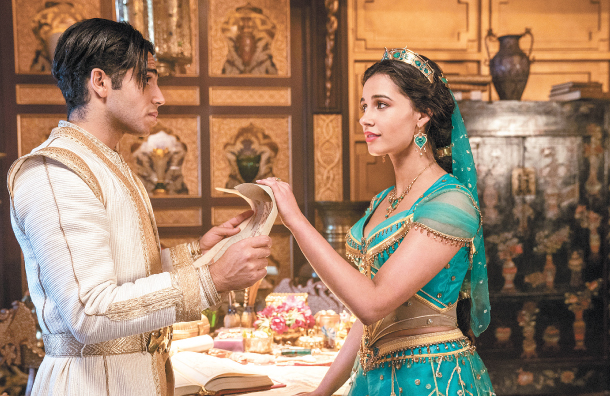 “Aladdin” wrestled its position atop the box office charts back from “Parasite” over the weekend after a two-week hiatus.

The live-action remake finally climbed back to number one this weekend after more than 1 million moviegoers saw the movie at 1,409 screens according to data from the Korean Film Council. The film reached number one in its release week, but fell after Palme d’Or winning “Parasite” was released the following weekend.

The popularity of the film is especially notable as its box office sales have surpassed those of “Beauty and the Beast” (2017), another live-action Disney flick that was popular among local audiences and sold a little over 5.1 million tickets. “Aladdin” has sold 5.3 million admission sales as of Sunday, making it one of the top three most successful musical films in Korean cinema history, after “Frozen” (2014) which sold over 10.2 million tickets and “Les Miserables” (2012), which sold about 5.9 million tickets.

The reasons for its popularity varies, but one major factor seems to be that the film can be enjoyed by all generations. Audiences have also praised the exceptional singing talents of the film’s two stars Mena Massoud and Naomi Scott. 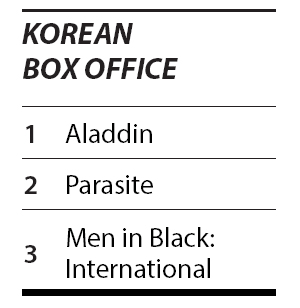 Although director Bong Joon-ho’s “Parasite” didn’t fare as well as the Disney musical over the weekend, an estimated 690,000 people saw the film at 1,205 screens, bringing it to second place for the weekend. Since its release, a total of 8.3 million tickets have been sold for the acclaimed work. About two families from opposite ends of the socioeconomic ladder, Bong leaves audiences pondering about the social hierarchies in a capitalist society which gives the poor no choice but to depend on the rich for their survival.

The film followed up its win of the Palme d’Or award at the 72nd Cannes Film Festival, with taking home Sydney Film Prize - the Sydney Film Festival’s top award - on Sunday. Bong personally attended the closing ceremony at State Theatre in Sydney, to receive the trophy and the prize money of 60,000 Australian dollars ($41,300).

“Men in Black: International” took the third spot on its debut week with 440,000 admissions sold through 1,055 screens. The lead roles are played by familiar faces from the Marvel films - Tessa Thompson and Chris Hemsworth. Men in Black’s branch in London, a top secret service with a mission to protect the Earth from alien invasions, recruits a new female spy named Agent M (Thompson) and pairs her up with one of the top agents of its branch, Agent H (Hemsworth), in order to destroy a group of aliens known as The Hive. These aliens are shape-shifters that can take on whichever form they want, including the branch’s own agents. To extinguish The Hive from Earth, the pair travels around the globe to once again, protect their world from outside forces.

The fourth spot was taken by animated film “The Pilgrim’s Progress,” an adaptation of the classic religious story by John Bunyan of the same name. The faith-based animated adventure was seen by 57,000 moviegoers at 381 screens. About an ordinary man’s struggle to seek deliverance for his sins, the Christian allegory seemed to resonate with the local audiences eager to see the tale on screen.

“X-Men: Dark Phoenix” dropped to fifth place after placing third on its debut weekend. Only about 33,000 tickets were sold at 443 screens. Although announced to be the final chapter of the current iteration of the X-men series, the plot seems to have failed to capture the interest of local viewers.