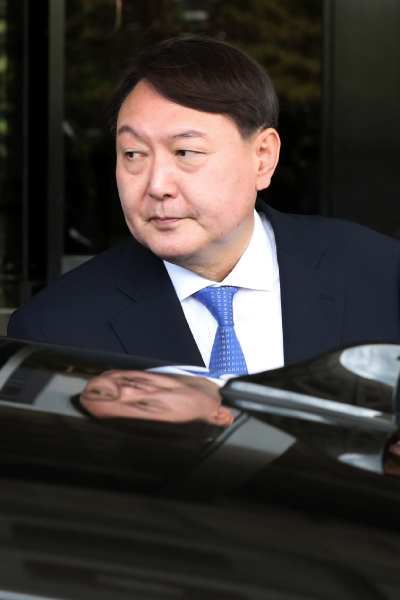 Yoon Seok-youl, who President Moon Jae-in nominated as the new prosecutor general on Monday, walks out of the Seoul Central District Prosecutors’ Office, which he currently leads. [NEWS1]

“While working as a prosecutor, Yoon fought against corruption and irregularities,” said presidential spokeswoman Ko Min-jung. “He has shown integrity that was not shaken by outside pressure.”

Ko said Yoon has been particularly praised by prosecutors, as well as the public, for successfully pursuing high-profile corruption and abuse of power cases involving previous administrations based on his leadership and focus on reform.

“We expect Yoon to eradicate various corruption and irregularities of society and complete the reform of the prosecution,” Ko said.

Yoon will succeed Moon Moo-il, whose tenure will end on July 24.

Yoon is a high-flying prosecutor who earned the nickname “swordsman” for indicting high-profile politicians and heads of conglomerates throughout his career. He became an icon of resistance in 2013, when he revealed during a parliamentary hearing that his probe into illegal meddling by the National Intelligence Service in the 2012 presidential election to help then-candidate Park Geun-hye was interfered with by his superiors.

The remark was taken as rebellion within the prosecution, which values loyalty to the chain of command. For the next few years, Yoon was assigned to trivial posts outside Seoul in a series of demotions.

He returned to the public spotlight in December 2016, when he was asked to join an independent counsel team that investigated President Park. Shortly after Moon took office in May 2017, the new liberal president handpicked Yoon to head the Seoul Central District Prosecutors’ Office, stressing that he wanted Yoon’s office to fully engage in court battles over the indictments of Park and her associates.

The appointment is also an important step in Moon’s other ambitious project to overhaul the prosecution by defying its long-held tradition of seniority.

Yoon passed the bar exam in 1991 and joined the Judicial Research and Training Institute in 1992. His predecessor Moon entered the institute in 1987, five years earlier than Yoon. Among the prosecutors, the year of admission to the institute largely decides their level of seniority.

“There were long-held traditions of seniority in the prosecution,” said Ko. “But it is not for the Blue House to comment on … Yoon was nominated for his strong conviction to fight against corruption and his will to overhaul the prosecution.”

Speculation is growing that top prosecutors more senior than Yoon, particularly those who entered the Judicial Research and Training Institute between 1988 and 1992, will likely step down to clear the path for the new chief prosecutor.

About 20 prosecutors are senior to Yoon, including Yun Wung-geol, head of the Jeonju District Prosecutors’ Office, and Song In-taek, head of the Ulsan District Prosecutors’ Office, who have openly challenged Moon’s reform initiatives. The administration and the ruling party have pushed to weaken the prosecution’s power by sharing its investigative power with the police and creating a new investigative agency to root out corruption by top public servants.

“Top officials will immediately resign after Yoon’s appointment,” a prosecution official told the JoongAng Ilbo. “Within the next one or two years, about 100 senior officials will resign.”

Others, however, say that the culture of seniority in the prosecution is fading, and not many will resign.

“If his classmates from the Judicial Research and Training Institute stay and his immediate seniors are promoted to the heads of high prosecutors’ offices, only those who joined the institute before 1990 will resign,” said a prosecutor-turned lawyer.

“The prosecution needs to change its seniority-based culture,” said another lawyer. “The prosecutors must respect the retirement age of 63 and give stern advice to improve the organization.”

Yoon will also become the first prosecutor to head the prosecution with no experience heading a high prosecutor’s office since the country introduced the tenure system for the prosecutor general in 1988.

The Seoul Central District Prosecutors’ Office under Yoon’s leadership has been investigating cases involving conglomerates, including an accounting scandal at Samsung BioLogics and a suspected cover-up by Hyundai Motor and Kia Motors on an engine flaw. It is believed that these investigations will gain momentum with Yoon’s promotion.