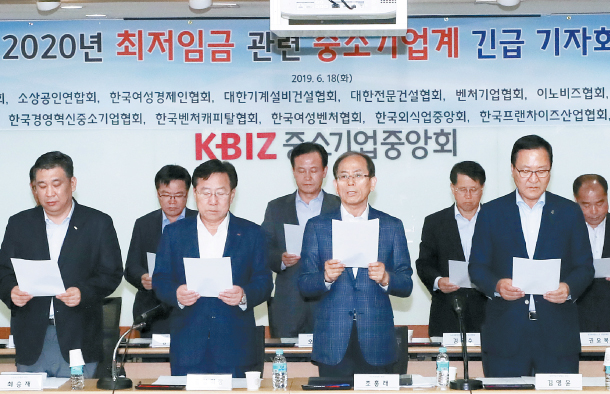 INNOBIZ President Cho Hong-rae, second from right, reads a statement on behalf of small and medium-sized enterprise (SME) leaders during an emergency conference in regards to the minimum wage hosted by 15 SME organizations Tuesday at the Korea Federation of SMEs building in Yeouido, western Seoul. Participating SME leaders argue that the government should at least freeze the minimum wage for next year. They contend that their companies have suffered significant managerial issues due to the continuing economic downturn and a steep increase in the minimum wage that has taken place under the Moon Jae-in administration. Since taking office, the Moon government has aggressively pushed its income-led growth policy, driving up income to stimulate spending. It decisively raised the minimum wage, lifting it more than 29 percent over two years. According to a survey of 357 SMEs across the country from the Korea Federation of SMEs conducted earlier this month, 60.8 percent of respondents said they are struggling with difficult managerial conditions. More than 80 percent of survey respondents said the minimum wage level should either remain as it is or be lowered. As a result, many of them are considering reducing their workforce size or closing their business. [YONHAP]