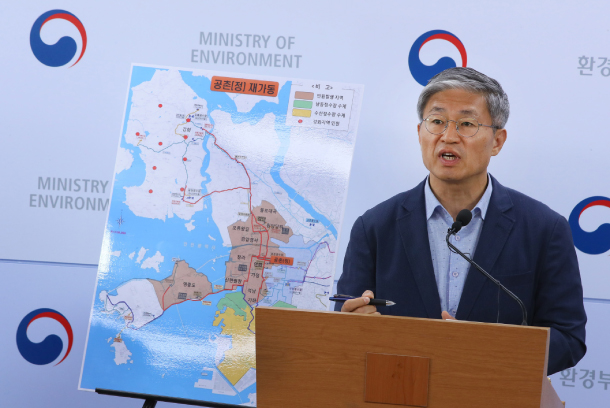 The director of the Ministry of Environment’s Water Environment Policy Bureau announces the preliminary results of a government investigation into the tainted water crisis in Incheon on Tuesday at the Sejong government complex. [YONHAP]

The tainted water crisis in Incheon that left thousands without drinkable water for the past 20 days was due to mismanagement of a water treatment facility.

The Ministry of Environment said Tuesday that its preliminary investigation showed that the Incheon city government failed to properly check water quality after it redirected water flow after maintenance to one of its water treatment facilities late last month.

When the water’s flow was reversed, authorities should have tested it to see if a change in pressure would stir up sediment.

Incheon failed to immediately check for traces of aluminum and manganese in the tap water that flowed into households in the city’s Seo District, Yeongjong Island and Ganghwa County since late last month, according to the Environment Ministry.

The Environment Ministry said city authorities failed to recognize that its water quality checking system was malfunctioning. The central government’s investigation team determined that on June 13.

Rusty-looking tap water was first reported in May 30 in the city’s Seo District, followed by similar reports this month in other areas.

The government said experts do not yet recommend drinking tap water, which leaves sediment traces even after filtering, although it can be used for washing dishes or clothes.

Incheon Mayor Park Nam-choon made an apology for the second day in a row after the government announcement. “As someone who is fully responsible for Incheon’s management, I apologize again for the recent faults surrounding the water system,” said Park. “We will continue to supply bottled drinking water until everyone feels safe.”

Park explained in an apology Monday that the city had failed to respond properly to the recent crisis by relying on past experiences of rusty water that normalized after a week.

The city said that as of Sunday, it has received over 15,000 complaints from residents about reddish-colored water since May 31. It received an additional 5,000 enquiries about compensation for damages caused by the drop in water quality.

An Incheon city official explained that complaints of reddish-colored water have decreased since June 7, but that there were still complaints of sediment in tap water.

Some restaurants and cafes in the affected areas have shut down.

As of June 14, 135 schools were affected by the tap water crisis, leaving 82 establishments to rely on bottled drinking water from the government. Cafeterias at 31 schools relied on meals supplied from other locations.

The protracted crisis led to a public backlash as around 2,000 Incheon residents took to the streets on Sunday to protest the lack of government measures to clean up the water.