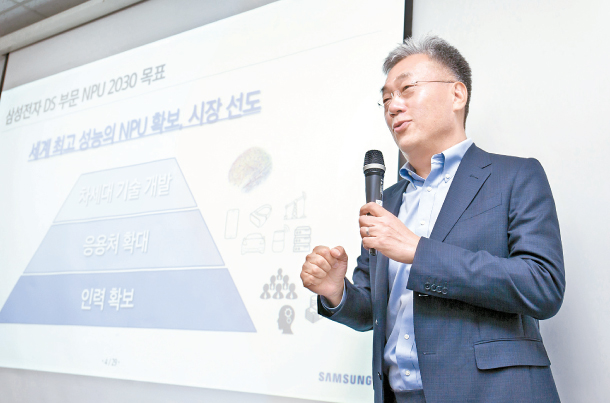 Samsung says NPUs are better suited for machine learning algorithm as they can process of vast amounts of data quickly, making it a core component for the new devices.

The company currently has around 200 researchers developing hardware and software for NPUs. The plan is to expand this number by 10 times by 2030, with software developers double the number of hardware developers added. Experts would be hired not only in Korea but also overseas, company officials said.

Samsung is working closely with its AI Lab in Montreal, Canada, and local academics at the Neural Processing Research Center.

“As we leverage our differentiated technology, close partnerships with global institutes and active investment in top talent, we are excited to take future processing capabilities to the next level,” said Kang In-yup, Samsung’s president of System LSI.

NPUs fall under this division.

NPUs will be integrated into Samsung’s system-on-chip (SoC) products. Its first NPU was introduced last year inside the Exynos 9820 mobile processor, a processor for the Galaxy S10 phone.

The NPU enabled the chip to process complex calculations on the device rather than by exchanging the data with an external cloud. Samsung says this “on-device AI” can accelerate speed and enhance security when using functions like voice and face recognition.

“Our first priority market is mobile - NPUs will be utilized in a number of Galaxy phones to come,” said Kang at a media event held Tuesday in central Seoul. “The next foothold will be on cars for infotainment systems and advanced driver assistance systems (ADAS).”

The announcement to invest in NPUs is part of the company’s plan to invest 133 trillion won ($112 billion) in its non-memory chip business by 2030. Samsung’s drive for NPUs is also backed by rosy expectations about the need for faster and better computing and rise in demand in the product sector. Stamford, Connecticut-based Gartner forecast in February that the market for NPU semiconductors will grow 52 percent annually to $34.3 billion in 2023 from $4.3 billion in 2018.

Having internally finished the development of a second-generation NPU, Samsung is currently in the process of developing a third-generation product. Its final goal in tech development is to realize neuromorphic processors that mimic the human brain and its way of functioning.