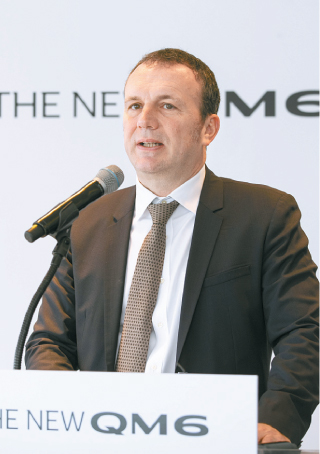 The new model includes a trim with liquefied petroleum gas (LPG) powertrain dubbed the QM6 LPe. It is currently the only LPG-fueled SUV in the country.

The company plans to sell 3,000 units of LPG-powered QM6 per month and become the top LPG-fueled car maker in the country, explained Yeon Je-hyun, product planning director of Renault Samsung Motors, at a media test-drive event held in Seoul and Incheon on Tuesday. Yeon added that Renault Samsung hopes to account for some 30 percent of the total LPG car market in Korea by 2030, growing from its current presence of 17 percent.

Hyundai Motor and Kia Motors have held onto a large share of the LPG car market by supplying LPG taxis, until recently one of the only types of vehicle permitted to run on LPG. With LPG cars now available to everyone, the market is expected to see great change, according to Yeon.

The automaker focused on safety and driving performance while designing the LPG version of the QM6. The car’s core competitiveness is in the so-called Donut Tank, according to Renault, a doughnut-shaped tank that stores the LPG. The tank is located beneath the trunk where spare tires can normally be found.

The new tank design offers greater safety compared to the previous cylindrical tank design, and also allows customers to make better use of their trunk space, the company said. The tank is made with steel that is harder but lighter than existing tanks.

The tank can hold 75 liters (20 gallons) of LPG, with the car able to drive roughly 534 kilometers (331.8 miles) using about 80 percent of that. Under Korean law, the LPG gas tanks can only be filled up to 80 percent of capacity.

Renault Samsung is betting big on its new SUV to boost its declining presence in the country as the launch comes right after a wage deal with its labor union was clinched last week. A ceremony to mark the conclusion of the deal will be held on June 24.