Horim Art Center looks back at decade of shows: In honor of the space’s 10-year anniversary, top pieces return

Horim Art Center looks back at decade of shows: In honor of the space’s 10-year anniversary, top pieces return 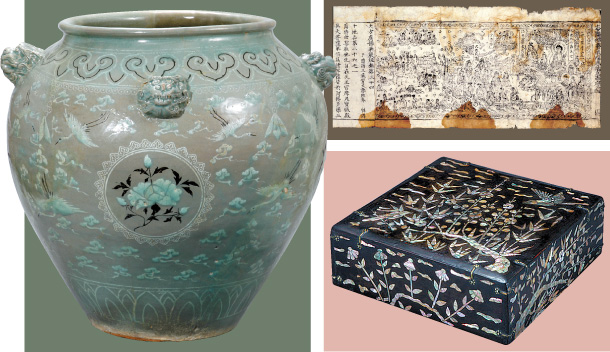 Clockwise from left “Celedon Jar” which was a highlight of the first exhibition at the Horim Art Center will be coming back for the upcoming 10th anniversary exhibition of the art center, which starts tomorrow. The painting “Myobukyeonhwagyeonggwon” is included in the exhibition to help visitors understand the Buddhist value of writing. A mother of pearl box from the 18th-century was part of the “Brilliant Hues - Mother of Pearl of Joseon Dynasty” exhibition held in 2015. [HORIM ART MUSEUM]

Dosan Park in Sinsa-dong, southern Seoul, is lined with haute couture boutiques, trendy restaurants and chic cafes. Among them sits a unique building resembling a piece of comb-patterned earthenware that houses the Horim Art Center. The center settled down in this trendy district 10 years ago as the Sinsa branch of the Horim Museum, becoming one of Korea’s top private museums filled with a vast collection of Korean cultural heritage.

Along with Leeum, Samsung Museum of Art in Hannam-dong, central Seoul, and the Kansong Art Museum, the Horim is considered one of few elite private art museums in the country and is home to some 15,000 artifacts including dozens of state-designated cultural properties.

To celebrate the art center’s 10-year anniversary in Sinsa-dong, the museum has organized a special exhibition that summarizes previous exhibitions that were held at the space over the past decade. So far, the art center has organized 36 large and small exhibitions. The 10th anniversary exhibition “A Decade’s Record and The New Stories,” which opens tomorrow, will put renowned and unique artifacts that were the highlights of 13 successful exhibits held at Horim Art Center over the years.

The Horim Museum began in 1982 at a small property in Daechi-dong, southern Seoul. The late founder of Horim, Yun Jang-sub (1922-2016) is the man who made all of the exhibitions at the Horim Art Center possible. As the chairman of the Sungbo Cultural Foundation, Yun, whose pen name is Horim, was able to accumulate wealth through his trading firm Sungbo Industry and chemical firm Sungbo Chemical, and had funneled much of his fortune into collecting traditional artifacts. He moved the museum to a new location in Sillim-dong, southern Seoul, in 1999, and in order to allow “more people enjoy traditional artifacts in the heart of Seoul,” Yun opened the Sinsa branch of the museum in 2009.

Mountain Peaks in Autumn” (1963), a landscape made by Korean painter Lee Sang-beom (1897-1972), also known as Cheongjeon. Lee was one of Korea’s ink-and-wash painting masters who pushed boundaries and advanced the traditional genre into the modern era. [HORIM ART MUSEUM]

The first traditional artifacts that Yun wanted to shed light on for the opening exhibition in 2009 were Goryeo-era (918-1392) celadons. Some 200 pieces of Goryeo celadon, the first kind of porcelain developed by Koreans, were on display for the “Goryeo Celadon” exhibition, receiving praise from both Korean and international visitors for showing the unique beauty, often characterized by intricate inlays and jade-green hues, of the Goryeo artifacts.

A highlight of the exhibit was the “Celadon Jar,” which was the largest piece of Goryeo celadon ever shown to the public at the time. It measures 48 centimeters (18.8 inches) in height and 50 centimeters in diameter. It was also the first time this particular piece of celadon was put on display for the public. For the upcoming exhibition, this highlighted item will be returning, much to the delight of Goryeo celadon fans.

Following the success of the first exhibition, the art center continued to present quality exhibitions by gathering together unique Korean artifacts that had rarely been seen before. 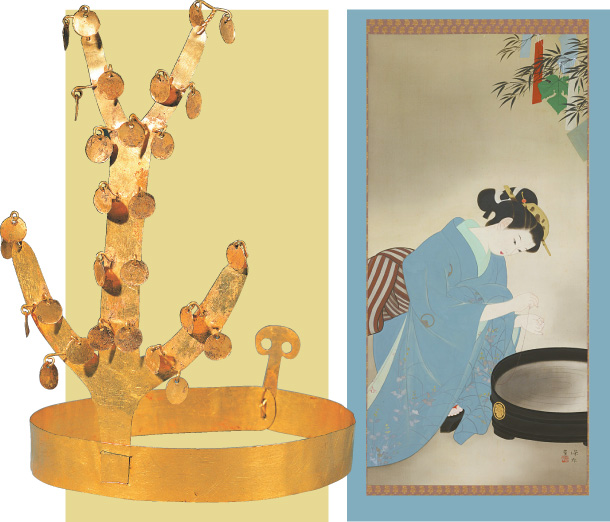 Left: “Gold Crown” from the Three Kingdoms Period (57 B.C.-A.D. 668) was originally part of the second exhibition at the art center. Right: “Galaxy Festival” (1946) by Ito Shinsui, was shown during “The Masters of Japanese Painting” in 2016. [HORIM ART MUSEUM]

Horim’s second exhibition, which ran for about three months in early 2010, is also included among the 13 exhibits. Titled “Eternal Light: Gold and Silver,” the exhibit introduced visitors to the world of Buddhist Art including ornaments, sculptures, crafts and household goods, all created in gold and silver. The most important artifacts in the exhibition were replicas of a sutra (Buddhist or Jainist scripture) and Buddha statues, which will be making a comeback for the upcoming exhibit. Korea’s National Treasure No. 211, the Saddarmapundarika Sutra, which is a replica of a sutra made in 1377 in Goryeo, will also be showcased at the exhibition. The exhibit will also bring back several gold-plated Buddha statues. The gilt-bronze Seated Mahasthamaprata from 14th-century Goryeo is Treasure No. 1,047. According to Yu, this artifact is one of the most outstanding Buddha statues from Goryeo.

Korea’s buncheong wares were also exhibited at the art center in the second half of 2010. The exhibition, titled “Buncheong Ware Ritual Vessels” at the time also attracted hundreds of visitors, allowing many to consider the beauty of this stoneware that was popular between the periods of the beautiful white porcelain of the later Joseon Dynasty (1392-1910) and the striking celadon of the earlier Goryeo Dynasty. At the time, visitors were surprised to find out that buncheong ware was once used in official ceremonies by the Joseon royal court. Some 120 buncheong ritual vessels from the 15th century were on display and several of them will be making a comeback for the 10th anniversary exhibition.

Other exhibitions that will be highlighted in the upcoming event include “The First Tripitaka” from 2011; “Earthenware” from 2012, which was a special exhibition to celebrate the 30th anniversary of the Horim Museum; “Horim, a Promenade Through the Forest of Cultural Heritage” from 2012-13; as well as the “Korean Folk Painting” exhibition from 2013; the “White Porcelain Jar” exhibition from 2014; “Brilliant Hues: Mother-of-Pearl of the Joseon Dynasty” from 2015; “The masters of Modern Painting: Calligraphy & Painting to Image” from 2016; the “Iron, Blooms into Flower” exhibition of 2017; and “Masters of Japanese Painting” from 2018.

“A Decade’s Record and The New Stories” exhibition will open on Thursday and run through Oct. 31 at the Horim Art Center in Sinsa-dong, southern Seoul. The art center opens everyday except Sundays and public holidays from 10:30 p.m. to 6 p.m. For more information call (02) 541-3523 or visit www.horimartcenter.org. Go to Sinsa Station, line No. 3, exit 1.