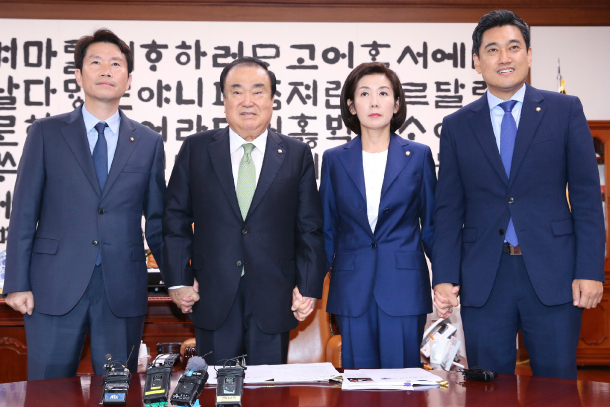 Korea’s largest opposition party hinted Tuesday at ending its months-long boycott of the National Assembly to participate in a confirmation hearing of President Moon Jae-in’s new nominee to head the prosecution.

“We no longer have the luxury of time to persuade this administration and the ruling party to change them,” Rep. Na Kyung-won, floor leader of the conservative opposition Liberty Korea Party (LKP), said Tuesday morning during an LKP policy meeting. “We need to diversify strategies, while quickly maneuvering to dig deeper on key problems.”

She then said that she will further continue discussing the matter with other lawmakers.

After the closed-door meeting with lawmakers, Na told reporters that the party will thoroughly vet Yoon.

“Nominating Yoon as the chief prosecutor means the Moon administration will continue its political, retaliatory probes,” Na said. “So we will thoroughly verify this part at the confirmation hearing.”

When asked if LKP lawmakers will attend the confirmation hearing, breaking their boycott of legislative activities, Na said, “It is too early to say since we have not received a confirmation hearing request from the government yet, but we will sternly scrutinize the nominee at the hearing.”

While the ruling Democratic Party (DP) said Yoon is the best candidate to complete Moon’s ambitious initiative to overhaul the prosecution, the conservative opposition parties, particularly the LKP, made clear their opposition to him. The LKP said Yoon has been a loyalist of Moon’s and has pushed forward brutal investigations and raids against conservative figures, including former President Park Geun-hye and President Lee Myung-bak, and that Moon was rewarding him for this with the top prosecutor position.

Yoon’s family wealth, which is mainly controlled by his wife, will also be scrutinized by the lawmakers at the confirmation hearing. Yoon’s family has over 6.5 billion won ($5.48 million) worth of assets, making him the wealthiest of 37 top officials in the prosecution. Most of the assets are owned by his wife, while Yoon reported about 210 million won in savings under his name.

The LKP started the boycott after it failed to stop the DP and other opposition lawmakers from fast-tracking controversial bills in April. The LKP said it will not lift the boycott unless the DP agrees to hold parliamentary hearings on the Moon administration’s economic policies.

The special legislative session for June is scheduled to open on Thursday, as 98 lawmakers from the DP and three other parties on Monday filed a request for it to open.

Even if the legislature is normalized, the Moon administration’s supplementary budget bill is unlikely to be passed smoothly, as the special committee on the budget is chaired by an LKP lawmaker.

The LKP has continued to demand parliamentary hearings to scrutinize the administration’s performance in economic policies.